meta Genomic Young Bulls: Accelerating Genetic Progress :: The Bullvine - The Dairy Information You Want To Know When You Need It

Based on insemination data for the first half of the year, the semen market share taken up by genomic young bulls hit the 70% mark in 2017, which compares to under 40% prior to the introduction of genomics in 2009 (Figure 1). Young sire market share spiked up quickly in 2010 as breeders wanted early access to elite sire blood lines that reached proven status in 2011. Thereafter, the adoption of genomic young sire usage has continually grown, year after year, to now reach 70%. Breaking this market share down further, one-third of it represents semen from genomic young bulls under two years of age while two-thirds is from bulls between two and four years of age. 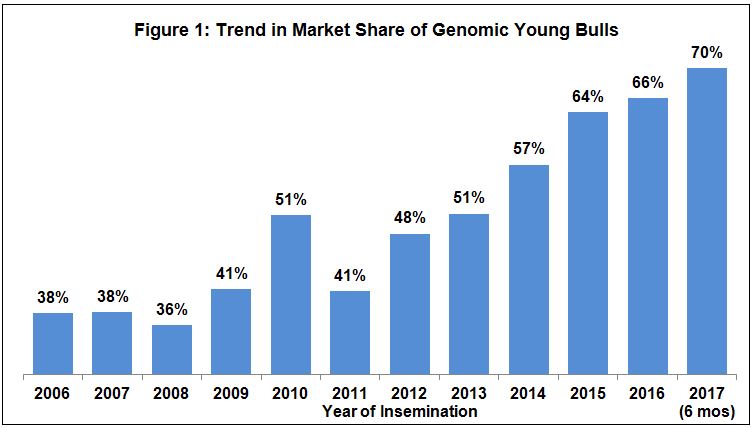 So why are breeders using more and more semen from genomic young bulls? The answer to this question is provided in Figure 2, which is based on young bulls marketed by A.I. companies with semen used in Canada. Genomic young bulls that had their semen released for use in Canada in 2016 have an average genetic merit of 3076 LPI (Figure 1) and $2226 Pro$. Figure 1 shows the trend in the average LPI for young bulls marketed in Canada since 2003 and defines three distinct time periods – before genomics (bulls with semen released before 2007), genomics introduction (bulls released between 2007 and 2010) and genomics adoption (bulls released since 2011). 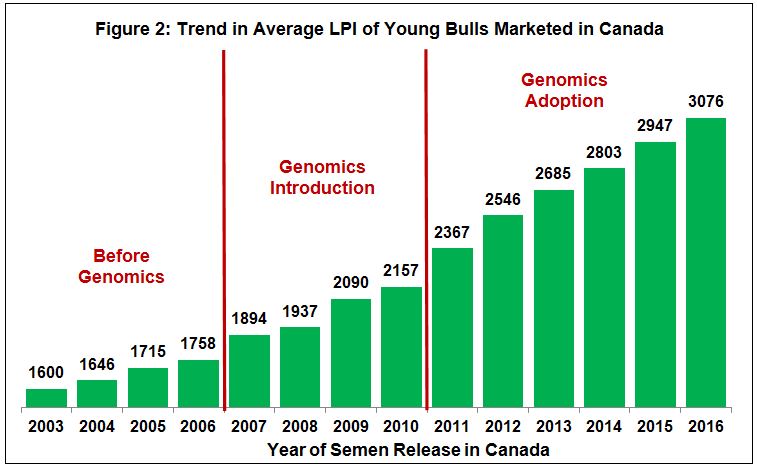 Table 1 provides a summary of the average annual gain for LPI and Pro$ for the young bulls offered to Canadian producers during each of the three time periods. Prior to genomics, the average increase in the genetic merit of young bulls tested in Canada was 54 LPI points and $87 for Pro$ (even though it did not exist at that time). For young bulls with semen released between 2007 and 2010, for which some genomic information was made available, the average annual gain was 99 LPI points and $172 Pro$, which translates to almost double the annual gain being achieved before genomics (i.e.: 1.83 and 1.98 fold for LPI and Pro$ respectively). Since genomics has been fully adopted by A.I. organizations for young sire selection, which occurred in 2011, genomic young bulls offer an average increase of nearly 150 LPI points per year and over $250 Pro$ per year, which is approaching rates of annual gain that are three-fold those achieved prior to genomics. Since Pro$ is an economic index expressed in dollar units, this result means that daughters of the genomic young bulls offered in 2016 will average nearly $700 more profit per daughter over their lifetime compared to the average daughter of bulls with semen released in 2013, most of which are now progeny proven.  This makes for a strong economic argument in favour of using high levels of genomic young bulls compared to progeny proven sires.

The popularity of genomic young sires continues to grow and reached the 70% mark based on inseminations during the first half of 2017. Although there is a growing trend towards the use of genomic young bulls aged two to four years, compared to those under two years of age, there is no indication that the overall use of genomic young bulls will plateau off in the near future. The significant trend in terms of semen market share is driven by the genetic superiority of the genomic young bulls being offered to Canadian producers year after year. High selection pressure being applied by A.I. organizations has translated to major increases in the genetic merit of young bulls marketed in Canada, averaging gains of 150 LPI points and $250 Pro$ each year.