meta Genetic Gain Before and After Genomics :: The Bullvine - The Dairy Information You Want To Know When You Need It

Genetic Gain Before and After Genomics

You’ve likely heard the statement: “Genomics has doubled the rate of genetic progress”. In this article, we find out if this claim is true by looking at genetic gain for indexes and individual traits before and after the implementation of genomic evaluations.

Figure 1 shows the genetic trend for LPI and Pro$ for Canadian Holstein females based on year of birth. The trends for LPI and Pro$ are essentially identical but since the scales for the two indexes are different they are plotted on different lines.

Prior to genomics, which began in 2009 for Holsteins, the average LPI for females born during the 5-year period from 2004 to 2009 was increasing by 50 LPI points per year. Since the introduction of genomics (vertical line in Figure 1), this rate of genetic progress has increased substantially. For females born in the past five years, from 2011 to 2016, the average LPI has increased gains of 107 points per year – over twice the amount of annual gain prior to genomics.

During the same time periods, the annual genetic trend for Pro$ increased from $79 before genomics to $176 per year during the past five years. This has happened without selection for Pro$ as the index was only introduced in August 2015. However, since Pro$ is made up of many of the same traits as LPI and the two indexes are correlated by 96%, selection for LPI was leading to an associated progress for Pro$ before this national index existed. 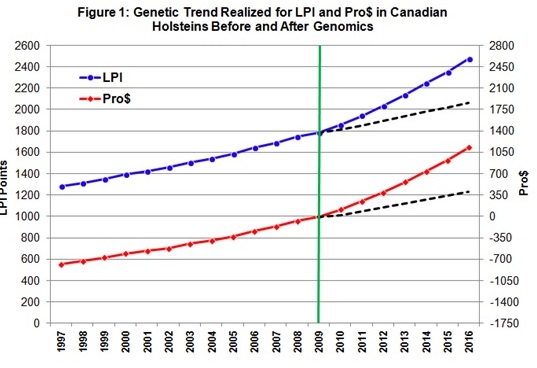 Like for overall indexes, genetic gain for individual traits can be assessed before and after genomics. Figure 2 shows the relative genetic gain by trait realized during the five years before genomics and during the most recent five years with genomics. Genetic gain is expressed in standardized units so that gain can be comparable across traits with different units of expression.

When comparing the gains achieved during the two 5-year periods, we can see that: 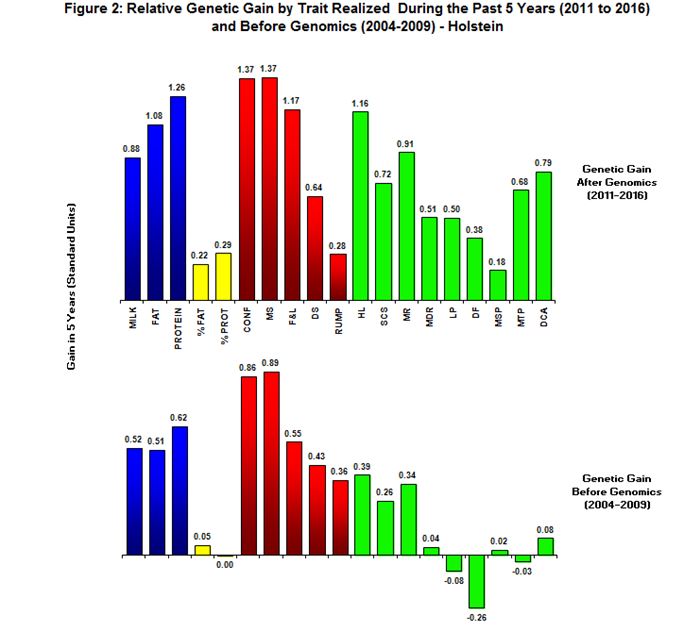 Another way to compare the genetic gain achieved pre- and post-genomics is presented in Table 1. Here, gains are expressed in the same units as proofs for each given trait. For example, yields are expressed as EBV based on kilograms while most functional traits are expressed as Relative Breeding Value (RBV) points.

In Figure 2 we saw that with genomics, there has been twice the amount of genetic gain realized for Protein yield in terms of standard units.  Referring to Table 1, we can see that the combined gain for Protein yield during the five years prior to genomics was 11.8 kg, or around 2.4 kg per year. In the past five years with genomics, the combined gain was 24 kg, or 4.8 kg per year. This means that females born in the last 5 years in a herd with average management are expected to have 305 day lactation yields that increase roughly 5 kg per year, on average. In this case, double the genetic gain translates into double the performance increase for protein yield.

Likewise, when looking at the functional traits, the combined gain for Herd Life during the five years prior to genomics was 1.12 RBV points, or 0.22 RBV per year. Over the past five years, however, with genomics, the combined genetic gain for this trait was tripled to 3.36, or two-thirds of an RBV point of gain per year. Significant gains with genomics have also been observed for other functional traits, meaning that Holsteins today can be expected to last longer in the herd due to improved calving and reproductive performance along with higher resistance to disease. 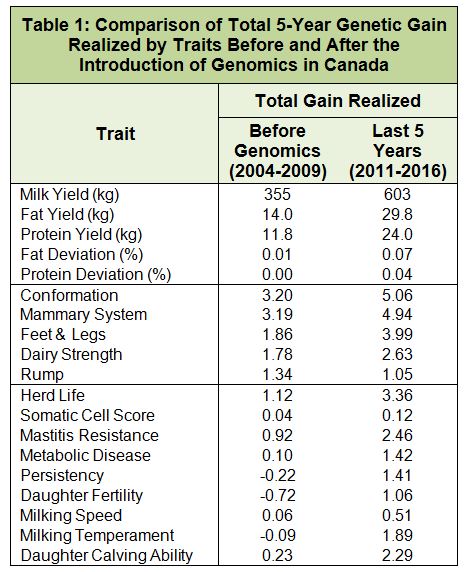 Genetic gains have increased substantially across the board since the implementation of genomics in Canada. While all traits have benefitted from the increased accuracy the technology provides, this is particularly true for lower heritability functional traits. The increased gain for individual traits translates into a rate of progress that has doubled for both of Canada’s national genetic indexes.