meta Fonterra’s milk slide worsens in Oz :: The Bullvine - The Dairy Information You Want To Know When You Need It 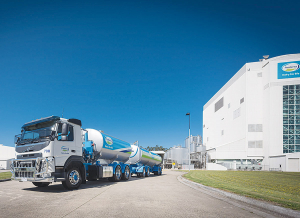 Fonterra’s Australian milk collection in July was down nearly 30%.

The cooperative kicked off the season there with a 28.9% decline in milk production as it continues to lose its collection share.

This was the percentage drop for the first month of the season, July, versus the same month last year. It represents a small percentage of the full year’s collection, Fonterra says in its latest Global Dairy Update.

However it admits its share of the milk collection continues to decline, impacted by intense competition for milk supply and the continued impact of the poor conditions on farm.

“The drought has led to an increase in cow cull rates, a significant number of farm retirements and a continuation of historically high input costs resulting in a material reduction of the Australian milk pool in FY19 (full year) versus FY18.”

Australian milk production in the 2018-19 season (ending June 30, 2019) was 8.8 billion litres, down 5.7% from 9.3b litres the previous year, says Bonlac Suppy Company chairman John Dalton. This production is noticeably greater than Dairy Australia’s previous estimate of a fall of 7-9% to 8.45-8.65b litres.

Dairy Australia anticipates a further drop in national milk production of 3-5% to 8.3-8.5b litres during the 2019-20 season, due to continued high input costs and the reduced size of the national herd.

In New Zealand Fonterra’s milk collection was up 2.2% in July versus the same month last year and 4.7% for the season to the end of July. Season-to-date collections represent only about 2% of full season collections.

NZ’s total production was up 4.8% for July. Fonterra’s South Island collection is up 8.6% for the season to date and the North Island is up 4%.

The update showed that European Union (EU) and US production is flat.

Imports into the Middle East and Africa showed large declines of 24.5% for May versus the same month last year and 11.4% for the year to the end of May.

Asia, Latin America and China imports continued to grow, with China up 8.4% for the 12 months to June this year.

“We will deal with it if and when it happens,” he said.

Participation levels were the highest in at least the last 18 months which is a good sign for demand.

“The dairy industry is not an easy industry to be in and volatility has been a constant for many years,” he said.

“The food industry, like many, is changing fast and requires businesses to review their investments and strategies regularly. Our strategy and investment decisions remain sound for dairy ingredients for the foreseeable future.”

Open Country says it is looking towards another solid year and that its projects are tracking well. It is well positioned with its large customers and multinationals, who now “view us as a long term strategic partner”.