meta Fonterra’s billion-dollar dive :: The Bullvine - The Dairy Information You Want To Know When You Need It 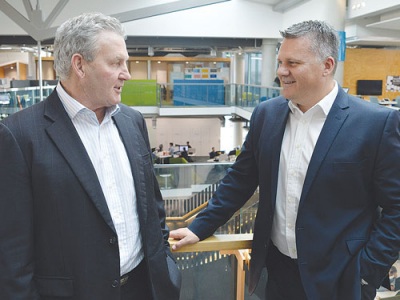 Fonterra’s new chair John Monaghan and chief executive Miles Hurrell have some work to do to turn around the co-op’s fortunes.

Lewis says the $196 million net loss announced last week, compared to $745m profit in 2017, means Fonterra must retain more earnings in the coming years to shore up its balance sheet.

“Fonterra has had a lot of time to become match-fit like the All Blacks, but that hasn’t happened,” he told Rural News.

“There’s a lot of competition around for milk now; more competitors are setting up and they all have strong balance sheets. If Fonterra wants to remain the number-one choice for NZ farmers they need to pull their socks.”

Lewis notes that apart from the net loss – the first in the co-op’s 17-year history – debt has increased, with gearing ratio now at 48.4%.

He says farmer shareholders will be unhappy with the poor results.

Chief executive Miles Hurrell says that in addition to the previously reported $232m payment to Danone, and the $439m write-down of the co-op’s Beingmate investment, there were four main reasons for the poor earnings performance.

“First, forecasting is never easy but ours proved to be too optimistic.

“Second, butter prices didn’t come down as we anticipated, which impacted our sales volumes and margins.

“Third, the increase in the forecast farmgate milk price late in the season, while good for farmers, put pressure on our margins.

“And fourth, operating expenses were up in some parts of the business.”