meta Fonterra’s Aussie farmers complain Kiwi counterparts get the cream :: The Bullvine - The Dairy Information You Want To Know When You Need It 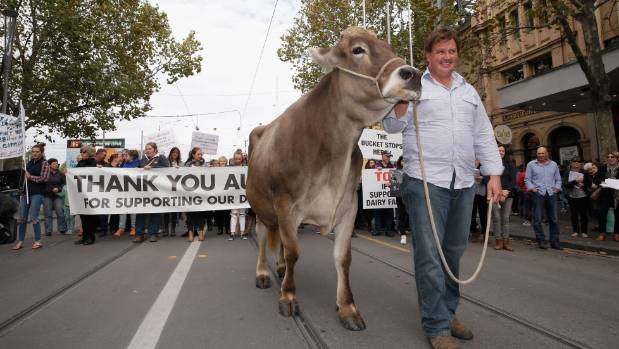 Despite griping about how much they are paid compared to their Kiwi counterparts, Fonterra’s Australian dairy farmers have been queuing up to supply it with their milk.

The amount of milk Fonterra Australia has collected from farmers has risen by 400 million litres to two billion litres last season.

But they say they are sick of being paid less than New Zealand farmers for the third year in a row.

Fonterra’s opening forecast for Kiwi farmers for the 2018-19 season is $7, whereas Australian farmers have been told the maximum they might receive is $6.78, although the price might go as low as $6.40.

As members of a co-operative, New Zealand farmers also receive dividends which in the last two years have been an additional 40c and 20c per kg respectively.

Farmer Power executive officer Garry Kerr said Australian farmers were being “screwed over” and next week were launching a campaign to raise public awareness of their plight.

Australians were still smarting over comments made by Fonterra chief executive Theo Spierings two years ago when he told New Zealand farmers “what we are doing is drive every cent of money which we can out of Australia back to New Zealand shareholders in this extremely low milk price environment.”

That year it revised its payments to Australian farmers for the 2015-16 season from $5.75 to $5 per kilogram of milksolids. In order to make an average payout price of $5 for the whole season, it reduced its payout to $1.91 for the last two months.

It then offered farmers the option of taking out a loan at an interest rate of 3.75 per cent.

Kerr said part of the reason farmers were increasing supply to Fonterra was related to the turmoil in the Australian dairy industry.

Rival co-operative Murray Goulburn (MG), previously the largest processor, has now been sold to Canadian company Saputo after a troubled financial history. Fonterra’s offer for the co-op was spurned.

A Fonterra Australia spokesman said Australian farmers were paid less because their payout was related to cheese. Most of their milk is converted into cheese, which has been a relatively stable priced commodity.

“The New Zealand price is based on a five commodity model and is driven by global dairy trade auction – predominantly whole milk powder – pricing, which means that prices move both up and down much faster than in Australia. In comparison, Australia sells next to no product on GDT.”

“It’s also worth noting that while Australia doesn’t experience New Zealand’s extreme highs such as $NZ8.40, it doesn’t have extreme lows like $NZ3.90 either,” the spokesman said.

Another factor in Australian farmers receiving lower prices is the supermarket discounting wars, with the stores drastically reducing milk and cheese prices to entice shoppers in to buy more expensive items.

The Fonterra spokesman said the $7 price for the 2018-19 season was a forecast, which could change according to the market.

Fonterra’s Australia operations have recently turned around as it invests in sites in Victoria and Tasmania –  for example, an expansion of its Stanhope cheese factory in northern Victoria, almost doubling its size.