meta Fonterra charges premium for A2 milk but pays farmer the same :: The Bullvine - The Dairy Information You Want To Know When You Need It

Fonterra charges premium for A2 milk but pays farmer the same 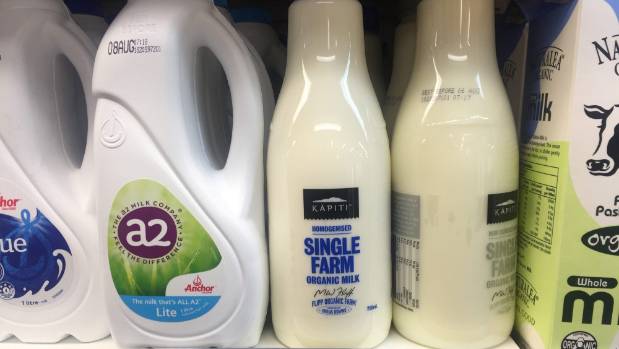 Selling for $3.99 a litre, A2 milk is the highest priced on supermarket shelves.

Consumers are paying top price for the newly launched Anchor A2 milk, but Fonterra is paying no more to the farmer who supplies it with the special variety.

That approach is at odds with the deal the dairy giant has with organic producers in which it pays farmers well over $2 extra per kilogram of milksolids, compared with conventional farmers.

The new line of milk is fetching the premium price of $3.99 a litre in North Island supermarkets.

Federated Farmers dairy chairman Chris Lewis said it was smart of Fonterra to be charging a high price for the milk while paying suppliers the same.

“If they are managing to get a premium for the milk, then good on them.”

Synlait supplier and Canterbury farmer Michael Woodward said he received 20 cents per kg for his A2 milk above conventional.

“Fonterra’s not offering any incentive for farmers to shift over because they don’t want to be seen to be disadvantaging farmers who supply it with A1 milk,” he said.

A1 milk contains a beta-casein which has been linked to a rising tide of type 1 diabetes, although Fonterra has argued against the findings.

However after years of holding out, it has now joined forces with the A2 Milk Company, which offers a proprietary testing system and a marketing brand that Fonterra is keen to exploit.

Fonterra Brands New Zealand acting sales director Grant Watson said “the consumers have spoken” as the reason why Fonterra had dipped its toe into A2.

“A2 brings to Fonterra a fantastic product that meets consumer needs. Twenty years ago we had two varieties of milk, today we have 10, ranging from organic to lactose-free, there is a need there and we will deliver.”

“It’s about providing consumers with choice, we can create value across both varieties. A1 milk is great, A2 is great. We believe it’s priced appropriately, it shows the premium nature of the product,” Watson said.

Following the launch, there was a greater demand than predicted.

“We’re only a few days into this but we’re seeing significantly higher demand than we originally expected, it will take some time before we truly understand the demand,” Watson said.

A2 Milk chief executive Jayne Hrdlicka said the company’s prospects were positive. At one stage this year it was the largest company by capitalisation on the New Zealand stock exchange.

“It’s the number one premium milk brand in Australia, we have been pulled into China driven by consumer demand, we are also selling fresh milk in China, and are very excited about the demand from US consumers.”

It had supply partnerships with Synlait and Fonterra only, and distribution relationships in China and the United States. South-east Asia was also a relatively untouched market.

Asked why Fonterra did not develop its own testing system, Watson said there was “no point in reinventing the wheel, and more importantly the A2 brand is very strong”.

Hrdlicka said the companies could do things separately but together they would be stronger, and get better and faster results.

Lewis said farmers were taking the move to A2 cautiously because they were unsure of the demand, did not want to flood the market and shifting their herds over to A2 was costly and time consuming.

His own herd was 66 per cent A2, but it would take another five years before he converted it over completely.

“I could separate them out into two herds now but I’m just watching to see what happens,” Lewis said.

Fonterra said in the future it would be sourcing A2 milk from a Fonterra-owned farm near Palmerston North.