meta Farmers Get Billions in Virus Aid, and Democrats Are Wary :: The Bullvine - The Dairy Information You Want To Know When You Need It

Farmers Get Billions in Virus Aid, and Democrats Are Wary

WASHINGTON — Cotton farmers were paid 33 times as much in federal subsidies in 2019 as the income they actually lost to trade disruptions, one study showed.

Farmers in Georgia, the home state of Agriculture Secretary Sonny Perdue, were paid more in federal aid per acre than anywhere else in the nation, another found.

Some farms collected millions of dollars in payments despite a limit of $250,000 per farmer.

The Trump administration’s $28 billion effort in 2018 and 2019 to compensate farmers for losses from its trade wars has been criticized as excessive, devised on the fly and tilted toward states politically important to Republicans. Now the administration is starting to send farmers tens of billions more to offset losses from the coronavirus pandemic, raising questions about how the money will be allocated and whether there is sufficient oversight to guard against partisan abuse of the program.

Months before an election in which some farm states are major battlegrounds, Democrats and other critics of the administration’s agriculture policies are expressing concern that the new subsidies, provided by Congress with bipartisan backing, could be doled out to ensure President Trump continues to win the backing of one of his key voting blocs.

Given the track record with the trade relief program, “I think Congress should be concerned in terms of letting U.S.D.A. just write checks with no oversight,” said Joseph W. Glauber, a top economist with the department for 22 years who is now with the International Food Policy Research Institute.

“Are these programs politically motivated? The short answer is yes,” he said.

Bill Northey, the Agriculture Department under secretary who oversees the aid, denied that underlying political motivations influenced how either the trade or coronavirus programs were planned or rolled out, saying “nothing could be further from the truth.”

The Agriculture Department has set aside $16 billion for relief from economic damage caused by the pandemic. But both administration officials and many members of Congress consider that only a down payment on farm losses that some estimate could climb to $40 billion, and the department will have billions more at its disposal to spend as of next month.

Farmers have been hit hard as the pandemic caused demand for food to wither at restaurants and schools and surge at supermarkets. With food processors unable to shift easily to the right market, farmers have been forced to euthanize tens of thousands of hogs, dump fresh milk into lagoons and plow ripening vegetables into the ground. With fewer people filling up their gas tanks, the demand for ethanol made from corn has cratered.

But the new program, hastily devised amid a host of uncertainties about the pandemic’s long-term economic impact, is also the latest example of the outsize clout wielded in Washington by operators of the nation’s roughly two million farms and the eagerness of politicians to help them. Despite decades of talk about weaning farmers off subsidies, the Agriculture Department has remained a font of funds from administration to administration. But Mr. Trump has taken that assistance to a new level. 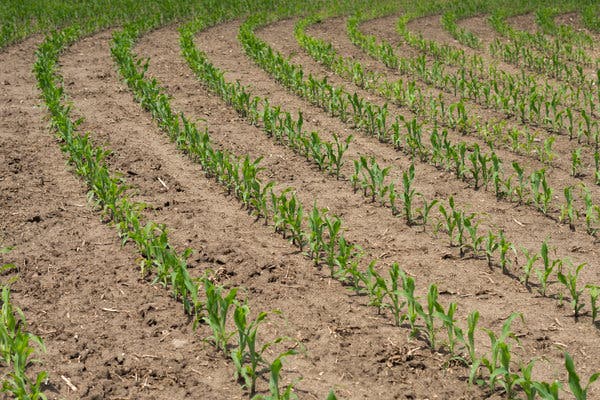 After tariffs on China and other countries set off trade reprisals against American agricultural products in early 2018, the president seized on the Agriculture Department’s ability to borrow from the Treasury Department to pay $12 billion in trade relief to farmers. That more than doubled what the administration was already paying out through other programs meant to protect farmers from falling prices.

In 2019, the trade relief grew to $16 billion, even after Mr. Perdue questioned whether more aid was merited.

Agriculture policy plays out against a complex political backdrop that can transcend party loyalties. Small farmers battle big agriculture for influence. Each region of the country has discrete interests, as do producers of different kinds of crops and other farm products.

But polls suggest that farmers are strongly united in supporting Mr. Trump. They are important voting blocs in key swing states like Wisconsin, vital in some states like Iowa that he is fighting to hold, and a core constituency in many other solidly Republican states across the Midwest and South.

Mr. Trump has showered them with money. Economists at Kansas State University found that farmers were paid up to as much as eight times their estimated losses from trade friction in 2018. Payments were even more generous in 2019, ranging from one-and-a half to 33 times estimated losses, after the department loosened how it calculated the trade damage to farmers, the researchers found.

Instead of comparing farmers’ reduced crop exports to their exports in 2017, the year before the trade wars began, it compared them to the best export year in the previous decade. That created a particular windfall for cotton farmers.

The trade relief payments drove up net farm income by 12 percent in 2019, according to Mr. Glauber, the economist. Without them, it would have fallen by 5 percent, he said.

Responding in writing to questions, Mr. Northey, the Agriculture Department under secretary, said that the program was put in place “before actual trade and price impacts were observed,” while the studies were conducted after the fact.

Other analyses, he said, found the payments were not excessive at all, an assertion also made by the National Cotton Council.

Mr. Northey cited a study for the nonprofit National Bureau of Economic Research as one example. But Sandro Steinbach, a co-author of that study, said it suggested that the department had indeed “paid out more than was actually lost.” While the government paid $28 billion in 2018 and 2019, he estimated that through mid-2019, the trade wars actually cost farmers about half of that. 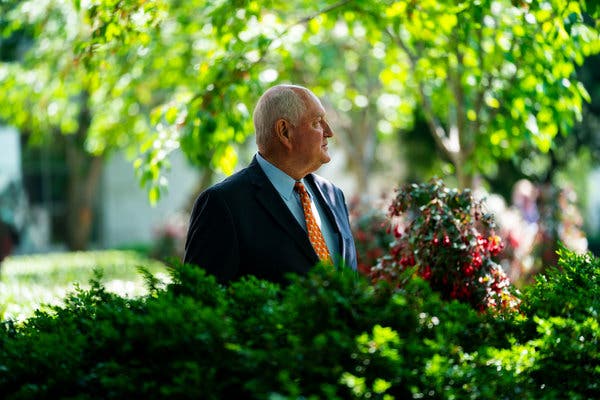 Colin A. Carter, his co-author, said the Agriculture Department had relied on “back-of-the-envelope” calculations and failed to account for the fact that sales to other foreign markets, as well as to the domestic market, mitigated some of the losses.

“It’s silly to ignore that,” he said. “But it’s politics, right? I guess that’s the way you keep them coming to vote for you.”

Both the Kansas State University economists and the Democratic staff of the Senate agriculture committee also found regional disparities in the disbursement of the aid. Joseph P. Janzen, the lead author of the Kansas State study, said the skewed benefits for cotton largely explained the disproportionately high payments to Southern farmers.

The average payment rate per acre to farms in Georgia and Texas, for instance, was more than four to five times higher after the Agriculture Department loosened the formula to calculate losses, he found. The Democratic report found that Georgia farmers led the list of top beneficiaries in the first round of payments in 2019, followed by Mississippi, Alabama, Tennessee and Arkansas.

“It’s stunning really. These are states that have positive political relationships with the president,” said Senator Debbie Stabenow of Michigan, the ranking Democrat on the Senate agriculture committee. She said she wanted to help farmers recover losses, but “the reality is that the administration up to this point has not distributed financial support in an equitable way.”

Although economists say that the benefits should be analyzed by acre, not by state, Mr. Northey said corn- and soybean-producing states in the Midwest received more money over all than Southern states.

The Environmental Working Group, a consumer watchdog organization, raised yet another problem endemic to many subsidy programs: The biggest farms receive most of the money.

That’s because while trade relief payments were capped — first at $125,000 per recipient, then at $250,000 — every farm “manager” could apply separately for subsidies, allowing multiple payments per operation. No limit applied for those who principally relied on farming for income.

That allowed DeLine Farms Partnership in Charleston, Mo., for example, to collect more than $2.8 million in trade relief payments in two years. Farms owned by the family of Jim Justice, the billionaire Republican governor of West Virginia who is often called the richest man in the state, collected $375,000, the watchdog group said. 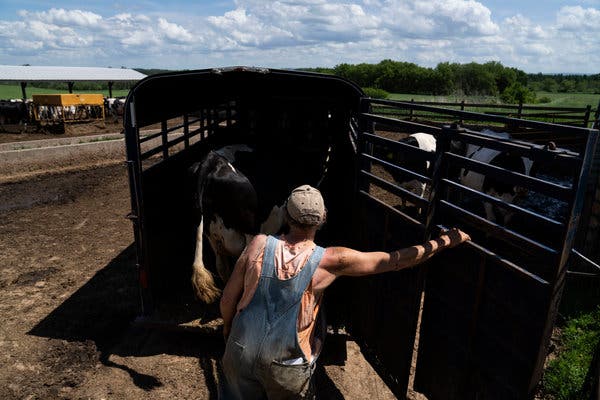 “Wealthy farmers and those who aren’t really engaged in farming get a big check,” she said, “while my farmers, who have dirt under their fingernails, get small checks or nothing.”

She said the panel was studying how to control the department’s use of money it borrowed from the Treasury Department for the Commodity Credit Corporation, the entity that financed trade relief and will partly finance the coronavirus payments.

“We need to put some guard rails on this,” said Representative Jim Costa, Democrat of California and a committee member.

Congress added $750,000 to the stimulus bill it passed this spring to beef up the Agriculture Department’s inspector general’s office. But Representative Cheri Bustos, an Illinois Democrat, said the White House’s pattern of reprisalsagainst agency watchdogs made congressional oversight even more important.

Economists say the Agriculture Department, under intense pressure from both the White House and Congress to deliver coronavirus checks to farmers, seems again engaged in major guesswork in trying to calculate losses. “They are basically running in the dark,” Mr. Steinbach said.

Mr. Trump is likely to be firmly behind rising demands to bolster the program when the $16 billion runs out, possibly by drawing on another $14 billion for the Commodity Credit Corporation authorized in the stimulus bill.

The president routinely cites his administration’s generosity to farmers as a political selling point. “The farmers have been paid a fortune already,” he said in April, referring to the trade relief payments.

“Under three years of my administration, net farm income has already gone up nearly 50 percent and will now be rising even faster,” he proclaimed in January.

That was only a slight exaggeration: The combination of subsidies and high commodity prices in 2017 drove up net farm income 42 percent in Mr. Trump’s first three years in office, according to Mr. Glauber.

Keith Ripp, a Republican who raises dairy cattle and farms four different crops in south-central Wisconsin, said he planned to vote for Mr. Trump in November despite the dual impact of the trade fight and the pandemic on his farm.

A former state representative, he said that he supported trade sanctions against China and did not blame Mr. Trump for the economic effects of the coronavirus. “At this point, I’m not pointing fingers at anyone,” he said.

But Sarah Lloyd, who raises 400 dairy cows in the same region and voted against Mr. Trump in 2016, considers the president’s handling of the coronavirus crisis yet another strike against him.

“We are just hemorrhaging money,” she said. After the trade disruptions, “this is another punch to the gut.”

Both farmers plan to apply for the new program, and several experts said the payment formulas might favor dairy farmers in states like Wisconsin, where the outcome in the presidential race could turn on razor-edge margins. Of the roughly half-billion dollars that has been paid out so far through that program, government data shows, Wisconsin has collected more than all but two other states.