meta Empty Shelves, Dumped Milk, Financial Hit: NY Dairy Farmers Suffer Due To Coronavirus :: The Bullvine - The Dairy Information You Want To Know When You Need It 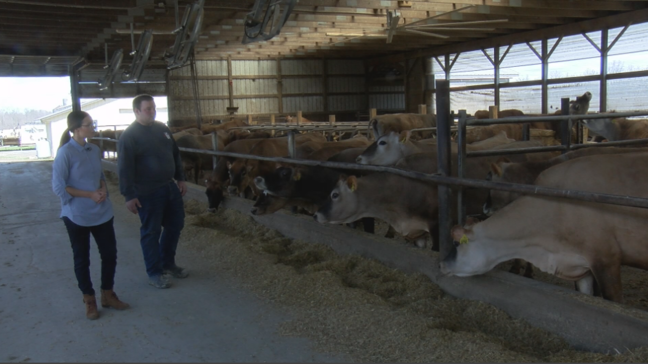 The coronavirus pandemic is setting back a number of industries, including dairy farms.

Even though low prices and high demand is causing milk to fly off the shelves in grocery stores, the pandemic has caused a shift in the dairy supply chain leaving some farmers forced to dump thousands of gallons of milk down the drain.

The outbreak has dried up the marketplace for dairy products as the industry’s top consumers remain close.

Restaurants, food service businesses and schools fuel a large part of business for dairy farmers. With them closed for the foreseeable future, it’s leaving farmers depending on just retail to sell their milk.

“That humongous segment of food service is not taking in the products like they used to,” said Nate Chittenden, dairy farmer and owner of Hollow Dutch Farm in Schodack Landing.

“We’re going to have to learn that some of these things take time through the supply chain to react,” said Chittenden.

Though Chittenden hasn’t been forced to dump any milk yet, he remains nervous because he knows the shift in the supply chain won’t be short term.

“If our economy is going to be down for a long time and that food service doesn’t come back on and we don’t see the same amount of dairy being used in our country as we were used to that means there’s going to be an over supply,” said Chittenden. “Our price forecast already shows milk prices is going to be much lower in the next couple of months so we’re trying to figure out where we’re going to cut costs.”

Unlike other businesses, dairy farms are dealing with can’t shut down production because their cows need to be taken care of and fed daily.

“A factory that knows that they don’t have to produce something, they can shut down the production line temporarily, lay off their employees, send them home and minimize their losses. They’re not selling something but they’re also not producing things. That cost the money,” said Chittenden. “For us, we still have to feed these cows every day and we still have to milk them every day whether that product is being picked up and sold or not.”

Chittenden said the two biggest costs are feed and labor.

The dairy industry has been struggling in recent y ears, and was just bouncing back up before the COVID-19 outbreak.

“We have been in an over supply in this country of dairy for several years now, since 2015, we’ve had more milk in this country than what we can possibly produce,” said Chittenden. “This is not a one month problem for us that we’re looking at. This has been five years.”