meta Donald Trump’s Latest Attack On Canadian Milk Is ‘Pure Rhetoric’ :: The Bullvine - The Dairy Information You Want To Know When You Need It 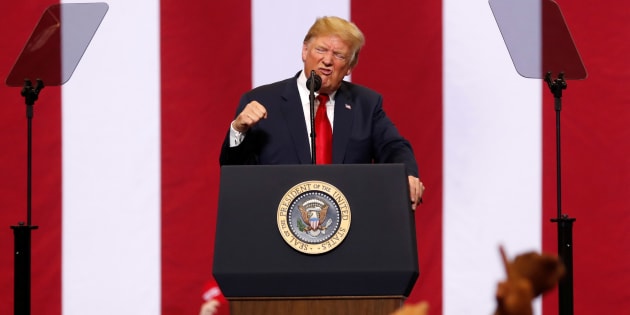 U.S. President Donald Trump speaks at a rally in support of Rep. Kevin Cramer’s run for Senate in Fargo, North Dakota on June 27, 2018.

There’s no truth in U.S. President Donald Trump’s latest claim that Canada recently jacked its tariffs on American dairy products, but that didn’t stop him from feeding it to a crowd of supporters in North Dakota Wednesday.

Trump addressed 5,800 people at a Republican rally in Fargo, N.D., and spoke for more than an hour on an array of topics from mocking Democrats to his proposed Space Force. It marked the president’s second attack on Canada’s supply management system at a rally this week.

“Canada charges us on dairy products a tariff of 275 per cent for your farmers in here,” he said, adding it’s a message to states such as North Dakota, Wisconsin, and New York that Canadians don’t want American dairy.

“Two hundred and seventy five per cent — and I actually hear that’s an old number. They raised it a number of months ago to 300 per cent. How horrible is that?”

While the U.S. loves its northern neighbour, Trump said, Canada is taking advantage.

“The era of of global freeloading, and taking advantage of the United States, is over. It’s just over,” he said, before moving on to talking about how hundreds of billions have been approved to make the American military “bigger and stronger than ever before.”

The Dairy Farmers of Canada said Thursday that the president of the United States is lying. Canada’s dairy tariffs haven’t changed in years.

“There have been absolutely no changes to any tariffs on Canadian dairy since Donald Trump became president, this is pure rhetoric,” spokeswoman Thérèse Beaulieu told HuffPost Canada.

Any change to dairy tariffs would have gone through a public process through the World Trade Organization, Beaulieu added.

Agriculture Minister Lawrence MacAulay did not directly respond to Trump’s latest dairy tirade, but said in a statement to HuffPost that the Canada-U.S. relationship “enables us to bring safe, top-quality food to tables in North America and around the world.”

Touting “millions of jobs” created on both sides of the border, MacAulay credited NAFTA for quadrupling trade in North America since the deal was signed in 1993. The original deal excluded dairy.

In a top dairy-producing state such as Wisconsin, there’s no equal management system in place — prompting the state to flirt with constant oversupply. Excess dairy is dumped.

With a new NAFTA deal still outstanding, Trump has been trying to make supply management a bargaining chip to get the oversupply of American dairy across the border.

His own agriculture minister, however, has insisted the U.S. isn’t interested in dismantling Canada’s supply management system.

Canada’s supply management system has drawn the ire of Trump as he travels across the country to campaign for Republican candidates in swing states, such as Wisconsin, ahead of November’s midterm elections.

“And you know cars are a biggie,” he said.

The two countries are on the eve of a trade war after the U.S. slapped tariffs on Canadian aluminum and steel in May, despite Trump’s commerce secretary confirming last week that Canada is not a security threat to the states.

Canada’s final list of to-be-tariffed American products is expected to be announced Friday.

The proposed tariffs will go into effect on July 1, Canada Day.