meta Delight as UK dairy farming couple win 11-year legal battle with local council :: The Bullvine - The Dairy Information You Want To Know When You Need It 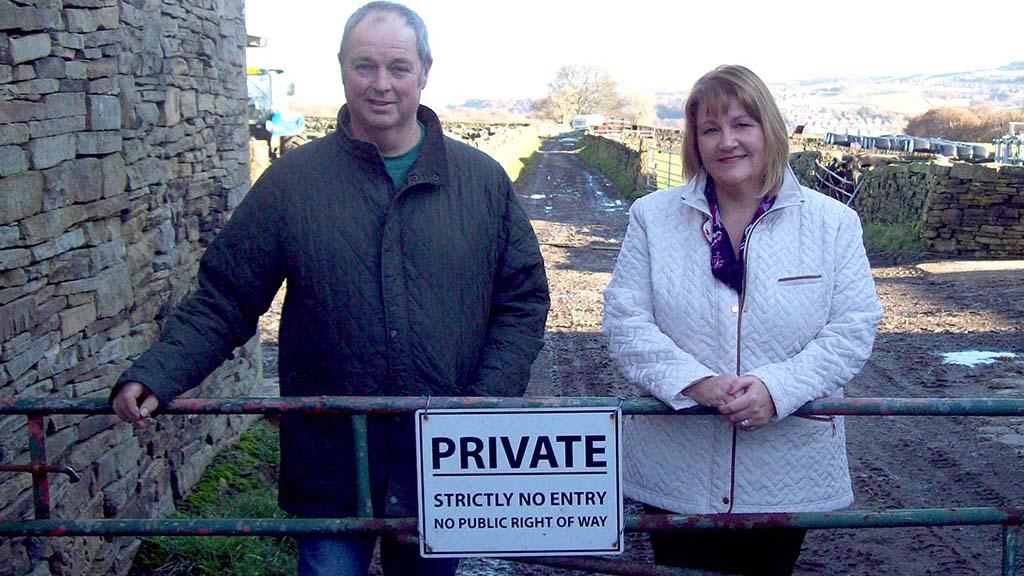 A dairy farming couple who took on their local council and won an 11-year legal battle over an alleged right of way through their farm hope their story will bring hope to others fighting access disputes.

Fourth generation farmers Edward and Angela Bradley who run a herd of Holstein Friesians in South Crosland, West Yorkshire, became embroiled in the row with Kirklees Council in 2009, when off road vehicles and motorbikes started to tear through the Bradleys’ farmyard.

The couple, who re-installed a gate to manage their cattle, discovered the local authority had illegally recorded, without notice, a public road through their farm in 1985. They were told they must remove the gate and let people pass through.

The row led to what Mrs Bradley called a ‘David and Goliath battle’, involving two failed enforcement attempts by the council to access the land, a failed county court appearance generated by the council, a public inquiry and even the ‘unjustifiable’ arrest of the Rights of Way consultant who was advising the couple.

Earlier this month, before the appeal was due to be heard by the High Court, the council and the Secretary of State agreed their position at the public inquiry was indefensible and that the council’s legal argument should be quashed.

Mrs Bradley, who has been supported by the NFU, said: “Council officers have made error after error in this matter and have been supported by ill-informed elected members who run our council resulting in a huge burden on the public purse.

«They must have an elastic bank account with our public money in it to have pursued us for 11 years as they have with an estimated cost to the taxpayer of £250K.

“We think their intention was to put us out of business and into bankruptcy by trying to wear us down with bully boy tactics of threats, enforcement notices and unlawful invasion.”

Mrs Bradley added: “I want to protect my farming peers so they do not have to go through what we have gone through. User groups submit access claims on unknowing, unprepared landowners whose land is then blighted by a claim which can take decades to be heard in public inquiries.

“In many cases landowners and important witnesses are dying before councils put these claims into the public domain and their families are left with costly and biased hearings that they cannot, in many cases, afford to fight.»

Mrs Bradley said some landowners had lost both their homes and businesses due to crippling legal fees.

A Kirklees Council spokesperson said: “The Government planning inspector looked as this closely and they made what they thought was the correct recommendation.

“However, the defendants – the Secretary of State for Environment Food and Rural Affairs and the council – have agreed that there were flaws in the decision of the government planning inspector which meant it could not stand and should be quashed by the court.

“We accept that a mistake was made here and we apologise for the impact this may have had on the Bradleys.”