meta Dairy producers switching to beef should do research :: The Bullvine - The Dairy Information You Want To Know When You Need It

Dairy producers switching to beef should do research 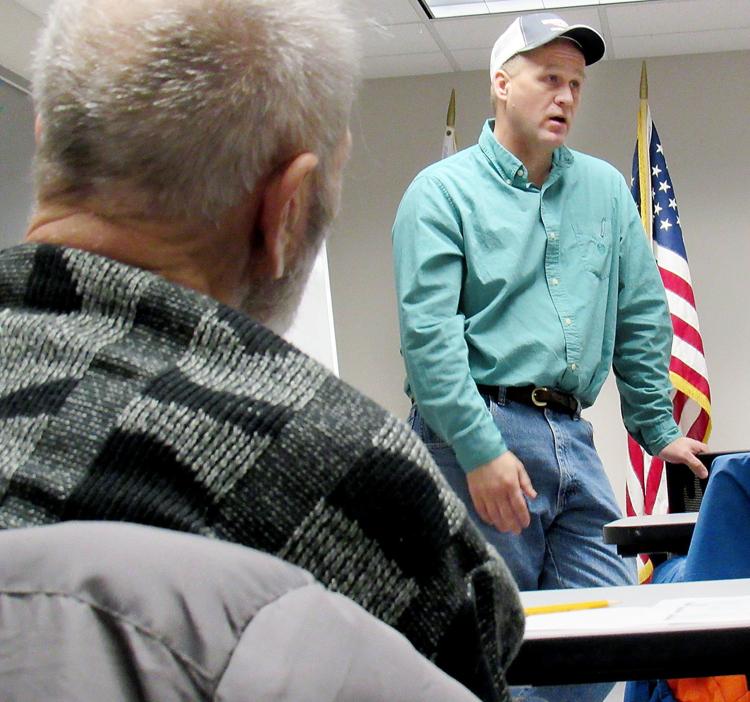 Logan Edenfield with Equity Livestock in Stratford discussed beef cattle marketing techniques and what buyers are seeking at a workshop on transitioning from dairy to beef held in Baldwin. Photo by Heidi Clausen

With milk prices stuck below the level of profitability for many dairy farmers this past year, more have been getting out and making the transition to raising beef cattle.

About 20 farmers and others attended a Dec. 11 workshop entitled “So You Want to Raise Beef?” in Baldwin. A similar workshop was offered the same day in Eau Claire.

“It’s getting to be a more popular topic for us,” said Ryan Sterry, UW-Extension agriculture agent for St. Croix County.

Rooted in the heart of dairy country, NorthStar Select Sires has seen its beef semen sales skyrocket by 300 percent this past year, according to the company’s Scott Ellevold, who also raises beef cattle north of New Richmond.

Ellevold said not only are more people breeding their whole herd over to beef as they exit dairy altogether, but many dairy farmers are breeding their best cows with sexed semen to increase their odds of getting heifer calves that will grow into replacement animals and their lower-end cows to beef bulls, as beef bulls generally fetch a better price at market than their Holstein counterparts.

Holstein bull calves are bringing anywhere from nothing to $60 at market, while a black part-beef calf from a Holstein dam might be worth $100 to $300, according to Logan Edenfield with Equity Livestock in Stratford. Edenfield grew up on a 50-cow dairy farm in Ohio that has since transitioned to beef. He came to Stratford in 2017.

He said farmers exiting dairy and going into beef must change their way of thinking. Those still milking cows and looking to retire should breed everything to an Angus bull, which will result in black-hided calves that tend to be worth the most, he said, and “then, you automatically have put a date on when you won’t have replacement heifers. It gives you a deadline and, in the meantime, gets you more value out of the calves you are selling.”

Edenfield recommends dairy farmers sell those calves at 3 to 5 days of age to reap the most benefit.

“Don’t keep them as beef cows,” he said. “You’d be starting behind the eight-ball. (The next generation) would be one-fourth Holstein, and those calves wouldn’t bring much.”

The other optimal time to sell these animals is after they’re finished.

None of the major packers, including Tyson and Greater Omaha, want those partial dairy animals, he said, and those slaughtering Holsteins won’t pay extra for animals with a black hide.

“There’s going to be a lot of them around and a lot finished,” he said. “Just know they’re black Holsteins, not beef animals. Some may bring close to beef prices, but not all will.”

With more black calves now entering the market, Edenfield said, those prices could move lower, but they’ll still be better than prices for Holstein bull calves and, currently, more than Holstein heifer prices, too.

“Over time, if you can make those cattle look uniform, it will help you, no matter what they are,” he said. “If finishing animals, there’s not much difference in hide (color). if you’re selling feeders, uniformity is the main thing. Black-hided cattle typically bring more; they don’t have to be quite as good to bring as much.”

He said it’s not so much about the color of the cattle as all the other details regarding management, and that’s why Beef Quality Assurance certification — now required by a growing number of packers — is increasingly important. Dairy farmers are automatically covered under the national FARM Program, but once they sell their herd, they must become BQA-certified. Certification is available free online.

“The buyer wants to hear the story. They want to know they’ve been cared for the right way,” Edenfield said.

Fast gain is the goal

Edenfield said there are a lot of opportunities for those entering the beef industry, but before dropping off a load of cattle at market, producers would be wise to talk with their sales barn manager to learn more about what buyers want. Many marketers are happy to visit farms and help producers figure out their next phase, he said. Producers also should consult with their UW-Extension ag agent, veterinarian (especially if buying calves), feed company representative and nutritionist before switching from dairy to beef.

“Too many dairymen … want to fatten them like your dairy heifers when you fatten steers. It doesn’t work,” he said. “Feeding steers, you want to shorten their life as much as you can” in order to minimize feed costs. In contrast, the goal with dairy cattle is to keep them productive for as long as possible.

“You can’t make them gain too fast or go (to market) too young,” Edenfield said of beef cattle.

If the decision is made to finish cattle, Edenfield said, farmers should be prepared to feed more energy than they did with their dairy herd. He encourages producers also to consider implants, which can be especially beneficial with Holstein steers.

“It’s not worth it to go implant-free,” he said.

“There’s nothing wrong with feeding silage, but you could feed them all the silage they want and nothing else,” he said. “They can use a lot of forage, but you have to have the energy to back it up.”

“You gotta go at it with a game plan,” Edenfield said of transitioning from dairy to beef. “The first thing to do is get the stalls out of (the barn) to prevent injuries and aggravation, and make sure to figure out a way the barn can go cold.”

Old stall barns are best suited for backgrounding calves — taking them from 300 to 400 pounds up to 700 to 800 pounds, “correcting” any problems and creating a bigger lot, he said. Certain advantages often come with size and scale and being able to fill a semi-load for market.

“If your land base is limited, consider backgrounding,” Edenfield said. “There’s where your profit is.”

If going the cow/calf route, he recommends buying straight-bred beef cattle and keeping with “something standard” such as Angus or Hereford.

“You don’t want to be the odd calf in the bunch; you probably will take a discount,” he said. “Don’t bring in a Swiss cross if you’re going to do Holsteins. If you’re going to fatten, it doesn’t matter as much because they’ll sell on their individual merit.”

Edenfield also advises farmers to buy a good mineral. Animals lacking a certain mineral may not be best using all the other nutrients they consume. Also, proper castration of steers could mean the difference between getting 85 cents per pound at market or 40 cents, so it’s worth taking the time to do it correctly.

Grass-based and organic may be good options for some, he said, and with the down dairy market, there could be some opportunity in buying and fattening Holstein heifers.