meta Dairy plant closure forces Pennsylvania farmer to end operations :: The Bullvine - The Dairy Information You Want To Know When You Need It 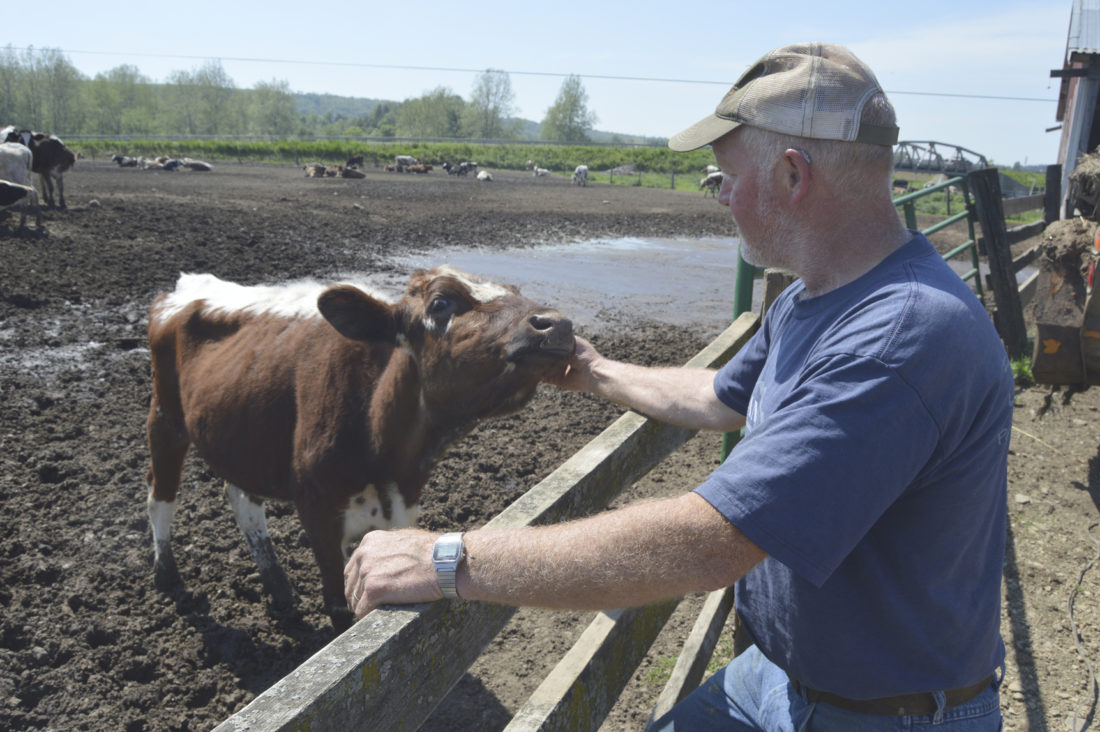 Thomas Gilkinson of Maleski’s Dairy Farm in French Creek looks over his farm Monday, a day before 150 cows were to be sent to auction. Like dozens of farmers in Pennsylvania and elsewhere in the country, Gilkinson’s contract with Dean Foods to provide milk to an Erie, Pa., dairy plant was terminated. Gilkinson has been forced to sell his cows, land and farming equipment due to the lack of a viable purchaser.

The loss of a contract to provide milk to an Erie, Pa., dairy plant is being felt locally as Thomas Gilkinson of Maleski’s Dairy Farm in French Creek is forced to sell his cows and farm equipment while he made his last delivery Wednesday.

The upcoming closure of Meadow Brook Dairy in Erie, Pa. this late summer or early fall is affecting farms throughout the area. Dean Foods, Meadow Brook’s parent company, issued terminations of contracts to about 100 independent farmers in eight states, some of which reside in Pennsylvania and New York counties.

Dairy farms that no longer market their milk to Dean Foods because of the termination of contracts that were announced roughly 90 days ago will have their contracts officially ended Thursday.

Gilkinson’s French Creek farm is believed to be one of the few farms in New York state to lose a contract with Dean Foods. Maleski’s Dairy Farm was served its letter of termination in February. Gilkinson said had planned for his son to take over his farm, but with the state it’s in, a fourth generation running Maleski’s is said to be unlikely.

With no other plants to take on their milk distribution, Gilkinson planned to sell his cattle, machinery and 40 acres of land to pay off debt. He also plans to get a job for five days of the week instead of his seven days spent running his dairy farm.

Gilkinson began the process of selling 150 of his cows Tuesday and is making his last milk delivery to Meadow Brook today, thus ending a cycle of the plant gathering 9,000 pounds of milk from Maleski’s Dairy Farm every other day.

Another situation Gilkinson finds himself in is having to rent his cows’ free stall to another farmer because he will want to break even on the building that was constructed last year with the help of a $150,000 grant program spearheaded by Gov. Andrew Cuomo in order to improve livestock handling. Gilkinson said if he had known what was coming with the closure of Meadow Brook, he likely would not have opted into the program, which required putting in tens of thousands of dollars of his own money to receive the state funding.

Gilkinson does not remember a year as challenging or life-changing as this; he remembers that 2009 came close with a $6 drop in milk prices per 100 pounds, from $19 to $13.

He plans to start looking for work soon and is optimistic for the future, mainly worrying about other farmers who might be affected. Gilkinson wants to coexist with people in a more traditional work environment and spend more time with his wife in his break from a farming job that worked him seven days per week for nearly all day, every day.

“(The closure) is going to cause a lot of problems around here,” Gilkinson said. “The dairy industry doesn’t look any better.”

Heil Transportation Inc. will also feel the effects of Meadow Brook’s closure. Instead of shipping milk via the trucking company to the more centralized Erie, Pa., location, farms will have to incur more costs to ship to Sharpsville, Pa.; Friendship, N.Y., or Buffalo locations.

Owner Dan Heil said industry rumblings suggested it was a surprise Meadow Brook Dairy lasted as long as it did.

Gilkinson also mentioned that a friend from Wisconsin is experiencing the same type of situation, highlighting that Dean Foods’ and other companies’ closure of plants is a nationwide issue.

On top of low milk prices, it has been a rough time for farmers like Bob Nickerson of Our Dream Farm in Columbus Township in Warren County, Pa. Nickerson has had to switch from marketing his milk to Meadow Brook to Middlefield Cheese in Middlefield, Ohio. His change of pace begins Friday, and he hopes for the best.

“Dean’s the best deal around; they have been,” Nickerson said, who laments the recent turn of events leading to Meadow Brook’s closure and the current state of the dairy market overall.

Nickerson hopes that more letters of termination won’t be sent out leading up to or after the official closure of the Meadow Brook plant later this year.

He said he is worried about Chautauqua County farms who will need to have their milk shipped to the Sharpsville plant of Dean Dairy Products Co. Nickerson believes there will be a price increase to move milk there instead of Meadow Brook.

While all may seem troubling with the dairy industry locally, Nickerson was still able to highlight some positives in the dairy market recently. He said fast food restaurants, including McDonald’s and Burger King, are now using butter instead of margarine, especially for their breakfast sandwiches.

He also mentioned that schools are reverting back to 2 percent milk and 1 percent chocolate milk instead of skim milk, so children are more interested in consuming a dairy beverage. Nickerson said that since skim milk has less flavor, many students were opting out of a choice of milk.

The Cornell Cooperative Extension was reached for comment about the Meadow Brook closure and Dean Foods’ terminated contracts with farmers. The nonprofit said it was investigating precisely how many farms in the county have been affected by the Meadow Brooks closure.