meta Dairy Farmer And Vegan In Huge Row Over Pink Sheep Publicity Stunt :: The Bullvine - The Dairy Information You Want To Know When You Need It 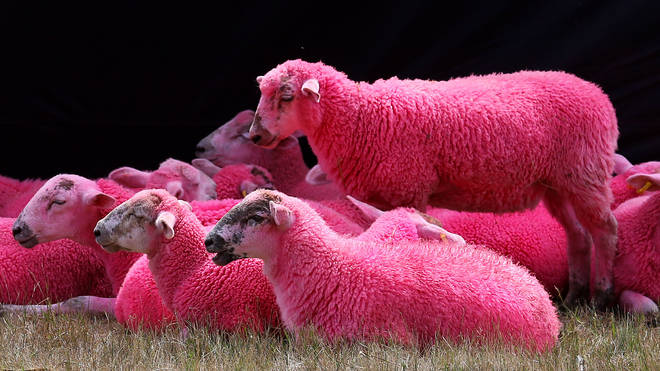 Latitude festival has been accused of cruelty over pink sheep stunt.

Ian Payne couldn’t get a word in when a dairy farmer and vegan clashed over whether it was right for Latitude Festival to dye sheep pink in a publicity stunt.

Dairy farmer Mark told Ian Payne that sheep are dipped to stop maggots, and so the music festival could “do what it wants”.

But Sarah insisted the farmer “shouldn’t have the sheep to dip” in the first place.

The vegan outlined how sheep are “harvested” and “sold as a crop”.

And as the pair put their arguments forward, their exchange became increasingly heated.

It comes as Latitude Festival shared a video of the fuchsia flock on its social media channels in promotion for their event.

But some users have criticised the organisers of animal abuse, with almost two thousand people signing a petition calling for the annual stunt to end.

The RSPCA said it was “sad to see” the sheep being used in this way, adding: “unfortunately this is not illegal”.

“We want all animals treated with kindness and respect and would discourage people from painting animals for novelty purposes.”

“We’ve learned enough about animals to know to respect and admire them for their ability to live in a world we’re fast destroying.”

In response to criticisms of the stunt, a spokesperson for Latitude Festival said: “In our animal welfare capacity, East Suffolk Council has no concerns about the sheep this year or in the 14 years that this activity has taken place.

“We are entirely happy that the water-based dye is completely safe and that the festival organisers have taken all appropriate steps to ensure the animals are content, safe and well-looked after.”

It added that the sheep are dyed using a dipping method they are “familiar with as part of their normal farm life”, and the dye itself was not harmful to the animals.

“The sheep welfare is the farmers priority and we are more than happy with both the dying and grassing available at the festival for the sheep.”

“They have plenty of shade and water and they graze on the grass.

“The farmers team do daily checks to ensure the welfare of the sheep is maintained throughout the festival.”