meta Cow DNA research could help humans live longer :: The Bullvine - The Dairy Information You Want To Know When You Need It 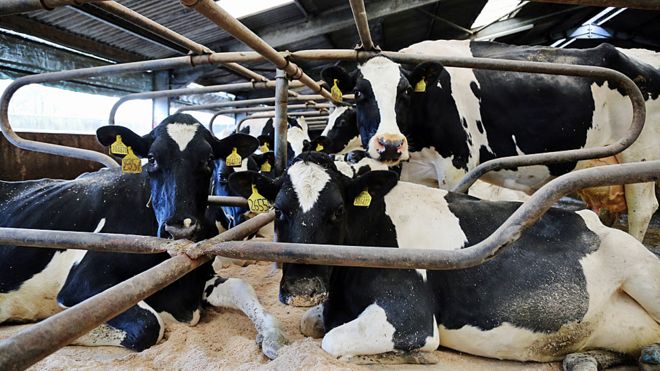 Research on a herd of cows in south west Scotland could play a part in helping humans live longer and healthier lives, scientists have said.

The study of their DNA by Scotland’s Rural College was carried out at the Crichton Royal Farm in Dumfries.

It found telomeres – which protect the end of chromosomes – deteriorate the most soon after birth, indicating how long and healthily an animal may live.

It could help human geneticists looking at how to prolong our life expectancy.

Prof Mike Coffey and his team studied the lives of 700 cows from the award-winning Langhill herd, taking more than 2,000 blood samples.

“We decided to study telomere length in dairy cows because of the work that’s been done in humans already,” he told BBC Radio Scotland’s Good Morning Scotland.

“There’s great breadth of work that suggests that telomere length in humans affects ageing in as much as young humans have long telomeres and old humans have short telomeres.”

He described telomeres as the “end caps” of chromosomes.

“Each time the cell divides they get damaged a little bit more and so, over time, they get shorter,” he explained

They took blood samples to look at how the cows’ telomeres changed.

“Hopefully that information then can contribute to the understanding of the way ageing takes place in humans,” he said.

“The idea was that if we can identify factors that affected telomere shortening – the rate at which they got shorter – that might contribute to the information in humans as to how we might have a healthier, longer life.”

Prof Coffey said the Dumfries herd was ideal for the study.

“These cows are kept in a very controlled environment so we can do observations on them knowing that the differences between the cows is actually genetic and not management because they’re all managed the same way throughout their entire lives,” he said.

“We found that in dairy cows that those cows that lived longer had longer telomeres.”

Prof Melissa Bateson, from the Institute of Neuroscience at Newcastle University, said the work could prove “really important”.

However, she dismissed the idea that companies could measure telomeres and give life expectancy advice because the measurements could be inaccurate and every person’s telomeres were different.