meta Controversial large-scale dairy proposal back on the table in Newton County Indiana :: The Bullvine - The Dairy Information You Want To Know When You Need It 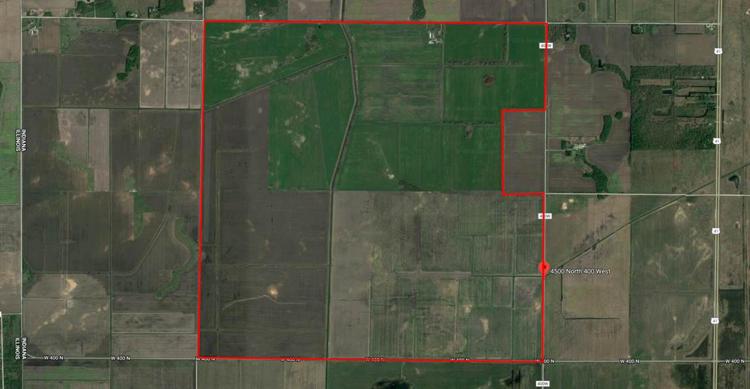 A Google map image shows the 2,500-acre farm at 4500 W. County Road 400 North in Newton County where Texas-based Natural Prairie Dairy has proposed a new 4,350-cow operation. A number of residents have opposed the plan, saying it could pollute the water in their wells, adversely affect their property values and hamper efforts to draw in more tourists to nearby public lands. Provided by De Jong family spokesman Charlie Stone

The Texas-based company behind a controversial plan for a large-scale organic dairy in Newton County submitted a new permit application last week to the Indiana Department of Environmental Management.

The De Jong family withdrew its initial permit application for Natural Prairie Dairy in May, after facing strong opposition from the community.

The family has been growing alfalfa and various grasses and applying natural fertilizer such as manure at its 2,500-acre property at 4500 W. County Road 400 North near Lake Village for more than three years, said Will De Jong, farm manager and nephew of company owners Donald and Cheri De Jong.

“This same land has been successfully farmed conventionally for over 100 years,” De Jong said. “But as organic dairy farmers, we will not use any pesticides, herbicides and GMOS, and we will be replacing the row crops with organic pasture grass.”

However, it’s the proposed dairy’s waste stream that has residents concerned.

Hoosier Environmental Council, which is representing several residents, said in legal filings the dairy’s previous proposals related to the handling of waste failed to protect human health and the environment.

Thomas Vanes, a member of the steering committee for the group Protect the Kankakee River Basin, referred questions about the new application to Ferraro.

IDEM said it has 90 days to make a decision on Natural Prairie Dairy’s proposal, and there will be a 33-day public comment period.

A lawsuit filed by the Hoosier Environmental Council on behalf of several residents also is pending in Newton County court. The residents want a judge to order the Newton County Board of Zoning Appeals to schedule a public hearing and rescind the special exception it issued to Natural Prairie Dairy in March 2017.

50 million gallons of waste a year

The number of cows the dairy is proposing remains unchanged.

During a meeting in June attended by more than 100 residents, Ferraro said 4,350 cows would produce more than 50 million gallons of waste a year and emit more than 700 pounds of ammonia daily.

“You have a (confined animal feeding operation) that is being proposed in the most ill-conceived site I have ever seen,” said Ferraro, who also represented Valparaiso-area residents in a recent battle against a different confined feeding operation.

The Natural Prairie Dairy property sits entirely in the bed of the former Beaver Lake, which was once the largest natural lake in Indiana, according to a technical review prepared for the Hoosier Environmental Council.

Beaver Lake was drained from 1871 to 1880, as the Beaver Lake Ditch to the Kankakee River was constructed. The area remains wet, with seasonal inundation just below the surface and frequent surface ponding, the review states.

Residents fear polluted water from the dairy could flow into the Kankakee River via two ditches and pollute the groundwater that feeds the private wells from which they draw water for drinking, cooking and bathing. They also worry the smell and flies associated with a large dairy operation could adversely affect their property values.

In addition, any degradation of air and water quality could hamper efforts to draw tourists to several nearby protected public lands.

The Nature Conservancy promotes its Kankakee Sands property, which is located to the east and south of the De Jongs’ proposed confined feeding operation, as “a 7,000-acre jewel in progress.”

Hunters and fishermen frequent the Willow Slough Indiana Fish and Wildlife Area, which is farther south and owned by the Indiana Department of Natural Resources.

Family: Farm not in floodway

In legal filings, the Hoosier Environmental Council said IDEM granted approval of the dairy’s initial proposal in violation of several statutes intended to protect the quality of surface and groundwater.

Natural Prairie Dairy’s new application states its waste management system will be in compliance with some of the statutes cited by Hoosier Environmental Council.

“Pursuant to IDEM regulations, our family organic farm is not located in a 100-year floodplain and/or floodway, and all barns and waste management facilities are two feet above the seasonal high water table,” DeJong said.

The company plans to install a Janicki Bioenergy advanced vapor recompression unit, which is a processor that “separates solid and liquid fractions of dairy manure to produce clean water, dried solids, and a concentrated aqueous ammonia fertilizer solution.”

The family planned to install and test the technology at its organic dairy in Texas before using it in Newton County, he said.