meta Competition heats up for controversial a2 Milk Company :: The Bullvine - The Dairy Information You Want To Know When You Need It

Competition heats up for controversial a2 Milk Company 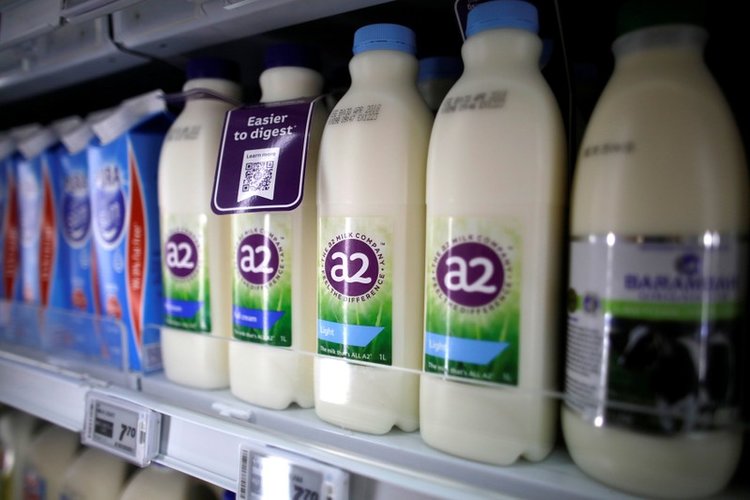 Stay-at-home mother Anna Wei wanted the best milk formula to feed her firstborn, so she chose the most expensive brand her money could buy: Platinum by a2 Milk Company Ltd.

“I always felt that the higher the price, the better the quality,” said 28-year-old Wei, who lives in Shanghai.

Buyers like Wei have fanned a phenomenal success for New Zealand-based a2 Milk and its controversial milk powder that is marketed as easier to digest than conventional milk because it lacks the A1 caesin protein.

As other dairy makers held back from selling similar milk, skeptical about its benefits and wary of undermining their regular milk sales, a2’s revenue more than tripled in the three years to June 2017 as Chinese parents embraced it. The company’s share price rocketed nearly 2,000 percent.

Regular milk contains both A1 and A2 proteins but some cows naturally produce milk without the A1 protein. Proponents of A2-only milk say the A1 protein causes indigestion for many people, while critics say more research is needed to substantiate the claim.

Now, several other companies, including the world’s biggest infant formula maker Nestle SA, have decided to sell their own brand of A2-only milk powder in China and other countries, which Mark Brown, chief investment officer at shareholder Devon Funds Management, said raises a question about the sustainability of a2’s success and its strategy.

“The problem you have is that a2 goes from this unique selling proposition to a ‘me too’ brand,” said Brown. “I’m… concerned about a continuance of the same rapid growth we’ve had and clearly, then, what you pay for that because the stock is enormously expensive.”

Reflecting high expectations built into the stock price, a2’s shares dropped 20 percent to a three-month low on Wednesday as investors were disappointed by a company forecast that sales would rise this year by 63 percent.

A large part of the company’s success has come from using unofficial and unpaid sales agents, or daigou in Chinese, rather than an established distribution network, or Chinese partner.

There are no official figures, but Brown estimates daigou generate as much as 80-90 percent of Australia and New Zealand sales, which would be around 60 percent of a2’s total infant formula sales.

Several Australian exporters of infant formula, including Bellamy’s Australia and Blackmores Ltd, turned away from using daigou in 2016, fearing a crackdown in China on gray-market imports, and shifted to selling directly or via Chinese partners to distribute their products.

But a2 stuck with daigou and it paid off. While a2’s revenues rose, those of Bellamy’s and Blackmore’s tanked.

The daigou buy items in Australia or other countries on behalf of Chinese buyers because prices for the same item in China can be much higher. When it comes to milk powder, many customers distrust brands produced in China following a tainted milk scandal in 2008.

Wei, for example, orders a tin of a2’s Platinum brand for $45 from a daigou to avoid an online price in China of about $70. The daigou buys the tin in Australia for about $22 and ships it to China.

As competition heats up, the challenge for a2 will be to keep daigou loyal. They are incredibly influential with Chinese consumers, marketing products via social media networks.

“Post the big rally, the name simply became too large,” said Rod Gillam, chief investment officer at Anchorage-based McKinley Capital Management, which has cut its stake in a2 to 0.6 percent from 1.7 percent over the past year.

Stock market filings and Thomson Reuters Eikon data show that Colonial had kept its stake steady or had increased it since December 2016, while Greencape and Challenger had been trimming their holdings since April.

Greencape and Colonial declined to comment. Challenger, which invests on behalf of several boutique funds, declined comment “because it’s our boutiques who are trading,” a spokeswoman said.

“Many of our large shareholders have had to sell down to comply with their own self-imposed rules,” about the size of individual stock holdings as a percentage of their portfolios, a2 Milk’s Asia-Pacific Chief Executive Peter Nathan told Reuters. He made the comments before Wednesday’s revenue forecast was released.

Nathan said the company’s daigou network continued to grow and the fact that other companies, such as Nestle, are launching their own A2 products “validates the A2 proposition and the extent to which further consumer awareness is created, it will strongly advantage the a2 Milk brand given out first move advantage.”

a2’s second-largest shareholder agrees Nestle could have a positive effect.

“I suspect that they’re going to assist consumer awareness and I certainly think that a2 Milk is disproportionately well positioned to be able to benefit from that,” Oyvinn Rimer, director at Harbour Asset Management, said following a trip to China “to verify that the thesis is intact”.

a2 Milk is also developing a growing distribution network in about 6,700 mother-and-baby stores and on major e-commerce platforms, Nathan said.

On its website, a2 says there is a “growing body” of scientific evidence supporting the argument milk with the A1 protein causes digestion problems, but many scientists are skeptical.

“In things like infant formula and toddler milk, there are no studies in infants and children,” said Jane Scott, professor of public health and nutrition research at Curtin University in Perth, who has studied a2’s claims. “It’s milk. It’s just expensive milk.”

a2’s Nathan said studies in relation to children are at advanced stages.

So far, Wei said she is satisfied.

“I might only consider switching brand if the nutrition value is the same and Nestle can offer a better price.”