meta Community shows up to give moving farewell to 7th generation P.E.I. farming family :: The Bullvine - The Dairy Information You Want To Know When You Need It

Community shows up to give moving farewell to 7th generation P.E.I. farming family 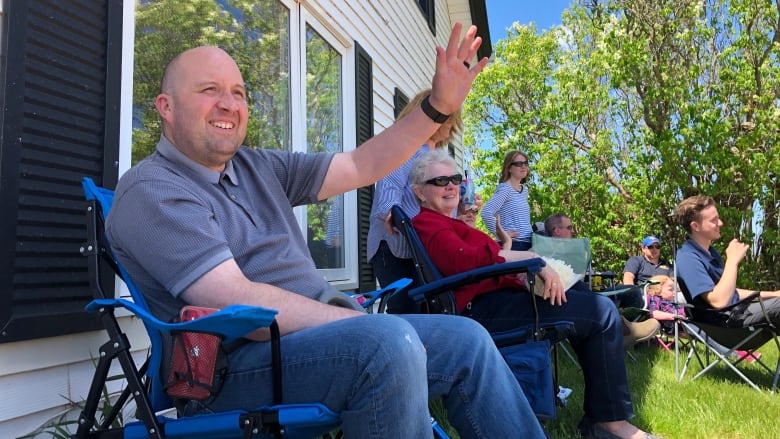 Derwin Clow waves as the dairy community says their goodbyes during the parade in front of the family farm. (Brian Higgins/CBC)

Traffic was bumper to bumper on Route 8 through Freetown, P.E.I., Thursday afternoon as the community rallied to say goodbye to a family that had been farming in the area for seven generations.

Derwin and Janet Clow, current owners at Cassialane Holsteins, sat surrounded by relatives outside the farm that has been in the family for more than a century.

Dozens of friends, neighbours and dairy producers passed by, honking their horns and showing their appreciation and support.

“That was amazing,” Derwin said. “For people to take time out to come and do that was — it was quite an honour to see it all.”

It was a way those in the area could show their support to the family, while following the province’s public health guidelines.

“In the midst of COVID, you know, we were trying to find a way to celebrate Derwin and Janet and this well respected family in as big a way as we could with the limitations that we have,” said Amy Bysterveldt from Winterbay Farms.

“So the idea came, let’s put a parade together and let’s get as many producers as we can to honk our horns and wave our hands and wish them well.”

Seated beside Derwin was his mother Blanche Clow, who had also been a part of the farm’s heritage.

Her husband Colbourne, who died in 2006, had turned the farm into an nationally-known progressive dairy farm during his time. Colbourne and Blanche raised Derwin and his sisters on the farm.

Derwin took over where his father left off.

Blanche watched as vehicle after vehicle, including tractors and dairy tankers streamed past.

She fought back tears as the pandemic kept the well wishers at a distance.

“I was absolutely amazed with all the people that come out,” Blanche said.

“I just — I’m so emotional right now that it’s hard to describe my feelings, but I will say I just appreciate it so much. It’s such a thrill too, to know that so many people care.”

Derwin said a recent diagnosis of multiple sclerosis had limited what he was able to do around the farm.

So after agonizing over what to do, they decided to sell the entire operation so a new generation of dairy farmers could step into their place in Freetown.

“The farm has 70 cows,” Derwin said. “They’re registered Holsteins and all our milk gets shipped to [Amalgamated Dairies Limited] and I’m guessing that that’ll all continue on as normal with the new owners.”

Derwin said he expects the new owner to be there very soon and he wishes them well.

“The new owners that take it on,” he said, “they’ll be able to hopefully prosper in this farm as we have for the last 100 years.”