meta Canadian dairy farmers angry at Trump, terms of trade deal :: The Bullvine - The Dairy Information You Want To Know When You Need It 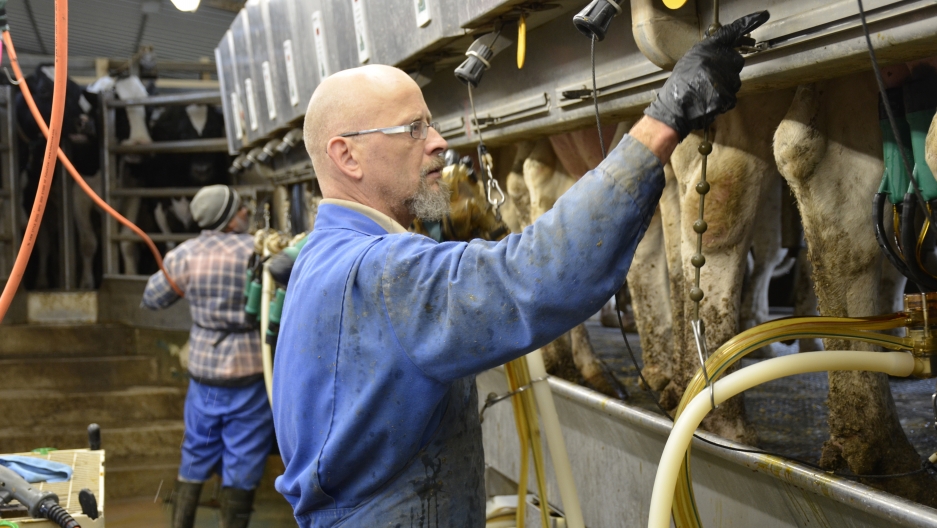 Workers milk cows at Armstrong Manor Farm in Caledon, Ontario. Computers measure how much milk each cow produces, then shut off the milking process when the flow decreases below a certain amount. Credit: Jason Margolis/The World

The new NAFTA agreement covers nearly 2,000 pages. Its 34 chapters address a wide range of issues, including digital trade, textiles, intellectual property and the environment. But if you were listening to President Donald Trump recently, you might’ve thought the agreement boiled down to one thing: Canadian milk.

The president has been railing against Canadian dairy farmers in rallies and Tweets for months.

The new trade agreement between the US, Canada and Mexico, called the USMCA, still needs approval by the legislative bodies in each nation. Under the newly-reached agreement, Canadian dairy tariffs wouldn’t go away entirely, but US dairy farmers would get more access to Canada, a worrying prospect for Canadian dairy farmers.

Phillip Armstrong’s family has been farming the same piece of land in Caledon, Ontario, since 1869. Obviously, dairy farming has evolved a lot since then. It’s also made huge leaps since Armstrong graduated college 37 years ago. Today, each of his 380 cows wears a high-tech collar.

Combine that technology with better breeding and nutrition, and Armstrong says his cows are nearly twice as productive as four decades ago. This might seem great, but it’s also created a problem for the world’s dairy farmers: They’re producing too much milk. To keep things in check, Canada has a system. Put simply: They match supply with consumer demand.

“Each farm has a quota and that’s our share of the Canadian market,” says Armstrong.

As part of its supply management system, Canada also places high tariffs on foreign dairy imports, up to about 300 percent. Canada does let in some American dairy before tariffs kick in, and as part of the updated trade deal, Canada would open up 3.6 percent more of its market to American dairy.

“And you go, ‘OK, well, it’s not much,’” Armstrong says. “But that’s growth in income that we’re giving up that allows us to modernize, to expand and everything like that. So, it’s frustrating for us as dairy farmers.”

Canadian dairy farmers have also given up more access to Europe, New Zealand and Australia through other recent trade deals.

“He was distorting the facts or maybe didn’t understand the facts, I don’t know,” Armstrong says. “And he said we were hurting their dairy farmers. Well, the Americans had a $600 million surplus with us. But he got into his head that we were mistreating their farmers.”

Many American dairy farmers agree with President Trump and applaud him for standing up for them. They point out that Canada also recently redefined some of its products — protein concentrates called ultrafiltered milk — and created price supports to effectively shut out American products. The new category — called Class 7 — will be eliminated under the new NAFTA agreement.

The pain on American dairy farms is real. Thousands of small American dairy farms have shut down in recent years.  It’s not all because of Canada though, far from it. American farmers have been squeezed out by consolidation, corporate agriculture, global competition and low prices. People are also simply consuming less milk.

“A lot of milk, in the past, has been dumped because it couldn’t be processed in an appropriate amount of time, or sold at an extreme discount,” says Brian Gould, a professor of agribusiness at the University of Wisconsin. “It’s just too much milk. We have too much milk in the US.”

While US dairy farmers may be in a bad place, Gould says the US shouldn’t be telling Canada how to manage its internal agriculture.

“We have no right to do that. I really think we’re on thin ice when we demand that they get rid of their quota system.”

Gould says to think of the reverse: Canada telling the US to dismantle its system. The US government sets a minimum price for milk and also provides subsidies to American dairy farmers.

And, the US has its own high tariffs on certain products — the US sour cream tariff, for example, is 187 percent.

“On other cheeses, you have like 50 percent tariffs,” says Graham Lloyd, the CEO of the Dairy Farmers of Ontario.

Lloyd says the whole milk spat with Canada is really about politics.

“Wisconsin being a significant, important state to the Republicans, namely Speaker [Paul] Ryan, and it was a state that carried Trump, became a political lightning rod,” Lloyd says.

Back on the farm, Armstrong says the new NAFTA agreement doesn’t address the fundamental problem: American farmers are producing too much milk. And Armstrong believes opening a little bit more of Canada won’t make a dent in that.

“I feel for the dairy farmer in the United States. I mean, it’s got to hurt,” Armstrong says. The new trade agreement, he says, “is going to hurt us here, but it has no impact on their well-being at all.”

Again, plenty of Wisconsin and New York farmers see things differently. They’re glad to have more access to Canadian markets.  Still, there’s an ironic twist here: Many American dairy farmers and organizations are actually now looking into a supply management system of their own … similar to Canada’s.