meta Canada’s Dairy Farmers Could Be Trudeau’s Nafta Bargaining Chip :: The Bullvine - The Dairy Information You Want To Know When You Need It 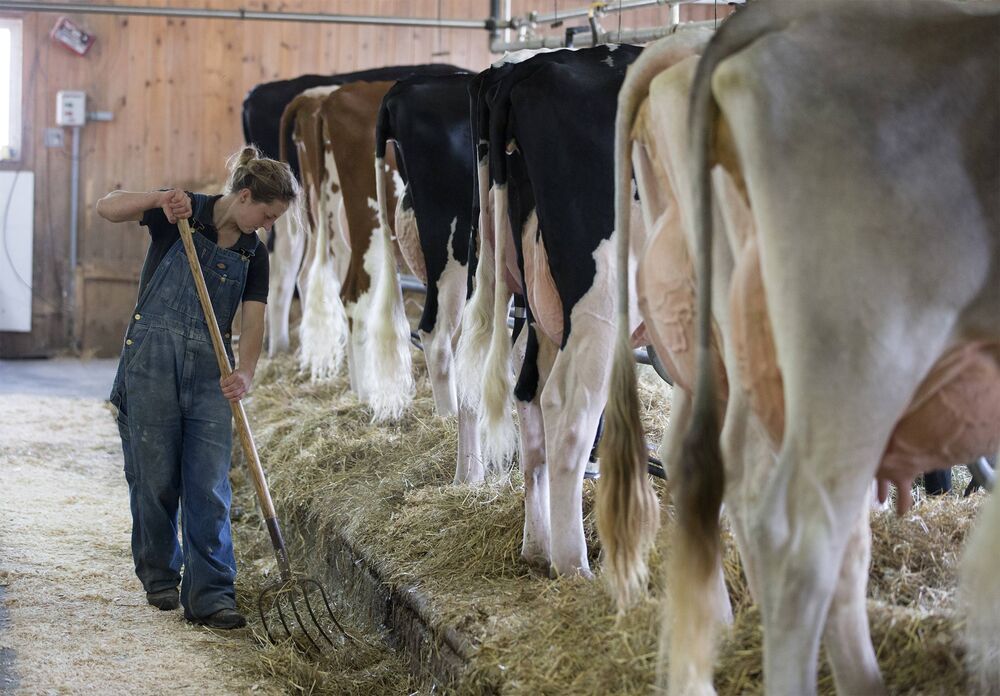 Henry Holtmann has seen this before – Canada carving off access to its dairy market as a bargaining chip, and using it in trade talks. Now it could happen again.

More than 2,500 kilometers (1,500 miles) from Washington, the third-generation Canadian dairy farmer is closely watching North American Free Trade Agreement talks, where U.S. President Donald Trump has taken aim repeatedly at his sector. Canada could once again barter away a piece of its restricted – and lucrative – dairy market, over outcry from farmers like Holtmann.

“I don’t want to see another slice taken out of supply management again,” Holtmann said by telephone from his farm in Rosser, Manitoba, where he and his brother have 550 cows. “It’s like death by a thousand cuts.”

Talks between the U.S. and Canada resumed again Wednesday in Washington, and will continue Thursday as the nations push to reach a deal to update the 1994 accord amid Trump’s threats to move on without Canada. Dairy is one of the core remaining issues. Canadian Prime Minister Justin Trudeau opened the door Wednesday to concessions, but only if they get something in return.

“Is there room for flexibility? We’ll see, and that depends on the kind of negotiations we have,’’ Trudeau said in a radio interview. But a dairy trade-off is no certainty. “We’re not going to accept that we have to sign a bad deal just because the president wants that. We’ll walk away and not sign a deal, rather than sign a bad deal for Canadians.’’

Canada’s supply management system controls output by matching production with demand through quotas and import tariffs, frequently attacked by Trump as evidence that the U.S. is being victimized by trade. The value of quota has steadily risen.

It’s not the only dairy lightning rod. U.S. farmers also complain about Canada’s so-called class 7 milk policy, which they say effectively blocks imports. The policy was rolled out last year and makes it cheaper for Canadian processors to buy domestic supplies of ultra-filtered milk, a concentrated ingredient used to boost protein content in cheese and yogurt.

The U.S. at first proposed phasing out Canada’s dairy system in Nafta talks, but has since moderated its demand –- now seeking more surgical changes, two officials familiar with talks said, speaking on condition of anonymity.

Doing so wouldn’t be unprecedented. Canada gave up a cut of its protected market in two previous trade deals: one with the EU and another with Pacific Rim nations. Farmers have historically been compensated in those cases.

Supply management is backed by all Canada’s major political parties, though some — including a prominent former Conservative lawmaker — oppose it, in part because it raises prices for consumers.

The Nafta dairy fight is being watched across Canada. Callum McKinven and his family have 150 cows at a farm atop a small mountain with a scenic view in North Hatley, Quebec. He, his wife and daughter milk 30 of the cows. They take pride in raising cows with good genetics and high pedigree, he says.

“We’re all concerned. I imagine they’re going to give some concessions,’’ he said by telephone. “I really hope our Prime Minister and our government stay firm because it’s not going to just affect the farmers.”

The Dairy Farmers of Canada, an Ottawa-based industry group, is sending a delegation to Washington to advocate for 12,000 of the nation’s producers.

“What the U.S. is really looking for is a place to dump their surplus subsidized dairy products in our marketplace,” David Wiens, a Manitoba dairy farmer and vice-president of the Dairy Farmers of Canada, said last week. He defended the class 7 system. “It’s not a tariff and it does not block imports and does not restrict American access,” he said, adding trade flow is already “highly stacked in the U.S. favor.”

There are broader structural issues with Canada’s dairy market where changes could go a long way, said Dan Ujczo, an Ohio-based trade lawyer with Dickinson Wright. That includes greater transparency in decisions. “That would allow those dairy farmers in the U.S. that rely on the Canadian market to adjust,’’ he said. “But I think the good news is that talk of dismantling supply management appears to be off the table.’’

Trudeau is trying to thread a political needle: pledging to defend the supply management system, while also not ruling out changes to it. The issue may be most fraught in Quebec, a French-speaking province where a provincial election is underway. McKinven, the Quebec farmer, said even small changes can ripple through the economy.