meta Budget 2019: Liberals recycle Tory plan to compensate Canadian dairy farmers :: The Bullvine - The Dairy Information You Want To Know When You Need It

Faced with an anxious dairy industry poised to complicate the next federal election for the Liberals — particularly in rural ridings in Quebec and Ontario — the federal Liberals are reviving the previous Conservative government’s compensation plan to ease the pain of recent trade agreements. 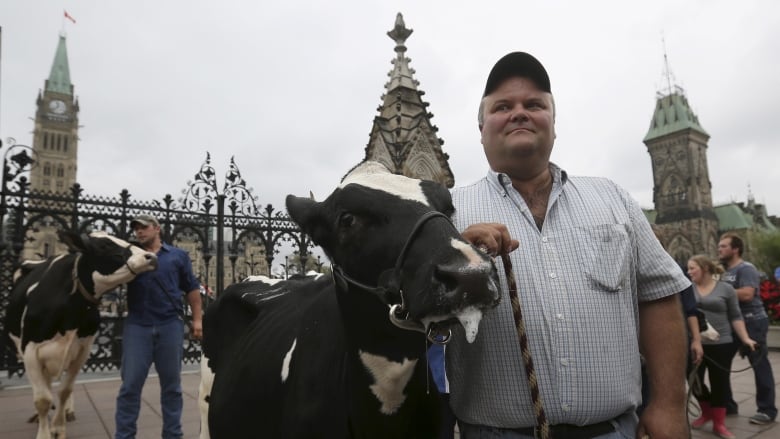 Dairy farmers brought their cows to Parliament Hill to put pressure on Stephen Harper’s government during the 2015 election, as negotiations for the Trans-Pacific Partnership (TPP) concluded. Tuesday’s federal budget may be trying to avoid similar protests against Justin Trudeau’s government this fall. (Chris Wattie/Reuters)Faced with an anxious dairy industry poised to complicate the next federal election for the Liberals — particularly in rural ridings in Quebec and Ontario — the federal Liberals are reviving the previous Conservative government’s compensation plan to ease the pain of recent trade agreements.

Between trade agreements already in effect — with the European Union and Pacific Rim trading partners — and the still-unratified rewrite of the North American free trade agreement, dairy farmers have said they believe at least ten per cent of Canada’s dairy market has been given up to foreign suppliers going forward.

Poultry and egg farmers are also at risk of losing significant shares of their supply-managed markets to American producers if the new NAFTA proceeds.

Now, Finance Minister Bill Morneau’s 2019 budget is pledging up to $3.9 billion for an income-protection program for those sectors, along with a measure to protect the value of farmers’ quota investments.

“There’s recognition that harm has been done. And that those revenue losses will be ongoing in the dairy industry,” said David Wiens, who represents Manitoba on the board of the Dairy Farmers of Canada.

While this prospect of help is welcome, “to be in a situation where we’re having to receive compensation from the government would not have been the choice of any dairy farmer in the country.”

Dairy concessions were the price Canada had to pay to be part of all three of these trade deals. Wiens said farmers were asked to “take one for the team” for the sake of the country’s overall economic growth.

The protected market they’re losing is unlikely to return.

“We’ve taken a look at some of those things that are causing people to worry,” Morneau told reporters earlier in the day, framing the overall approach of his final budget before October’s election.

These sectors definitely were worried. Farmers and processors urged the Liberals to commit to compensation comparable to what Stephen Harper’s government announced when Trans-Pacific Partnership negotiations concluded in the middle of the 2015 federal election campaign.

The Conservatives said at the time that Harper’s cabinet had approved a compensation package in advance — one worth up to $4.3 billion if necessary, depending on the real losses the industry sustained over the deal’s first decade.

But when the Liberals took power, they claimed this spending was never finalized. Nothing close to a compensation package of that magnitude has been offered since.

One aspect of the Conservative plan — funding to help farmers and processors compete by upgrading their equipment and improving their efficiency — was replicated when the Liberals announced $350 million to offset the threat of competition from European cheese imports after the Comprehensive Economic and Trade Agreement (CETA) was signed in the fall of 2016.

That funding was completely distributed almost immediately after it became available.

When Canada’s concessions in the new NAFTA deal were finalized late last year, the Liberals launched a consultation process with the dairy industry to work out what additional help would be needed to keep the industry sustainable over the longer term. Stephen Harper, seen here campaigning with his wife Laureen on a Quebec dairy farm in 2011, led a government that supported supply-managed agriculture but ultimately conceded some market access to land big trade deals. (Sean Kilpatrick/Canadian Press)Officials said Tuesday that process isn’t over. In the meantime, this federal budget shows what’s being offered to counter the negative effects of both CETA and the Comprehensive and Progressive Trans-Pacific Partnership (CPTPP), both of which took effect at the end of the year:

It’s the same approach the Tories took to trade compensation: one pool of funds available for demonstrated income losses and to help rural communities with the transition, and a second pool to protect farmers and commercial lenders (who may have financed farm investments) from reduced quota values.

“The structure of it is very similar, almost identical,” said Rachel Curran, who was Stephen Harper’s director of policy at the time. “It looks like the aid package for farmers was essentially lifted from the 2015 campaign announcement.”

Answering a reporter’s question during a press briefing ahead of the budget’s release, Morneau acknowledged in French that he was continuing the approach of the previous government. He said the exact details haven’t been worked out.

Budget documents offer no timelines or criteria for these funds.The Finance Department also says work continues on addressing the needs of processors, who aren’t covered by this funding for producers.

The government is also studying the “potential future impacts” of the new NAFTA.

The revised North American trade deal not only gives up a share of the Canadian dairy market, it also implements export caps and requires the dismantling of Canada’s competitive price class for dairy ingredients — two concessions that may threaten the industry’s future more than new competition from imported products.

The timeline for this assistance may be key: “If this is paid out over many years it will have less of an impact than if it’s paid out aggressively,” he said. 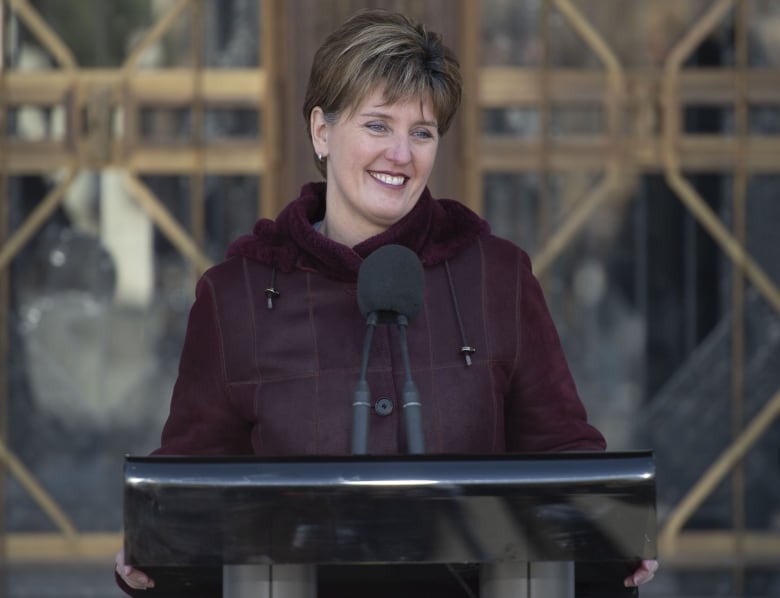 Marie-Claude Bibeau, who represents a riding in Quebec’s Eastern Townships that includes many dairy farmers, became Canada’s first female agriculture minister in the March 1 cabinet shuffle. She said she’s very “close to the producers in Quebec” and it’s a “huge privilege” to represent their interests. (Justin Tang/Canadian Press)Wiens said farmers will work with whatever the government of the day is, and don’t need to get into whatever politics may be playing out. But “if the government declares support for our industry and for supply management, then we expect that it should be followed up with the reality of their actions.”

The Conservatives’ $4.3 billion package from 2015 was criticized as overly-generous, Curran said. “It was expected, at that point, that actual losses [from the TPP] would not be anywhere near those numbers.”

The concessions made in the new NAFTA are larger than those Canada made to get the former TPP, she noted.

But offering $3.9 billion without real details? “This looks like almost a last-minute insertion,” Curran said, calling it a “defensive cover-off.”

“It’s almost certainly a response to supply-managed farmers, who are well-organized, and well-funded, and they have no hesitation running advertising campaigns against the government or criticizing the government if they feel that they’re not being properly supported,” she said.

“This was almost certainly put in place to forestall that in advance of the 2019 election. Guaranteed.”