meta Blossom: The Cow that Saved Mankind :: The Bullvine - The Dairy Information You Want To Know When You Need It

Blossom: The Cow that Saved Mankind 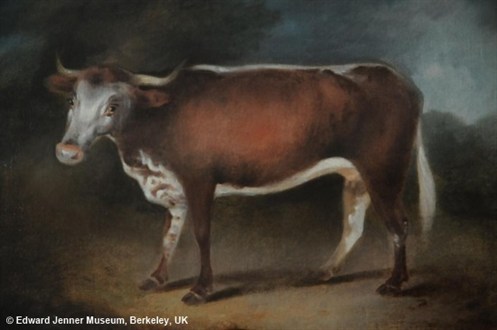 As UK Covid-19 vaccinations achieve over 30million – more than half the country’s population – few will know of a dairy cow called Blossom and the work of an English country doctor, Edward Jenner whose, pioneering 1796 work led to vaccination procedures.
Largely forgotten to history, Dr Jenner’s work remains one of the greatest breakthroughs in medical science estimated to have saved the lives of over 400million people. Jenner (1749 -1823) known as “The Father of Immunity” created the world’s first vaccine having observed the protective effect of cowpox against the deadly smallpox.
Jenner postulated milkmaids were generally immune to smallpox and realised the pus in the blisters on the teats of cows with cowpox, protected milkmaids from smallpox. At that time, smallpox was rampant within populations and at times up to 60% of populations were infected with the disease, manifesting a death-rate of between 20-30%.
The human body became severely disfigured with smallpox blisters, leaving pox marks, especially debilitating through severe facial disfiguration that could also lead to blindness. The old English saying: “She has a complexion like a milkmaid” referenced “desirable” skin complexion with an abstinence of widespread facial pox marks (prevalent at that time) with the stereotypical milkmaid image of comely young maidens with fresh, rosy complexions,
In 1796, milkmaid Sarah Nelmes contracted cowpox from a cow called Blossom. Dr Jenner scraped the pus from the blisters on Sarah’s hands. He then inoculated his gardener’s eight-year-old son, James Phipps in both arms, resulting in a fever and uneasiness but not a full-blown infection. He later injected Phipps with variolous material without any resulting disease; and Phipps was later challenged with variolous material and again, did not show any sign of infection.
Dr Jenner demonstrated protective cow pox pus could be transferred from human-to-human, not just from cattle to human, and successfully tested his hypothesis on 23 additional subjects. Jenner used the Latin word “vacca” for “cow” to create the word vaccine. Jenner’s miraculous discovery resulted in queues of farm workers lining up at his surgery for free jabs having stated it was “immoral” for him to profit from the discovery.
The Gloucestershire country doctor’s findings were highly controversial at that time and strongly disputed by the medical establishment. However, the success of Jenner’s discovery spread throughout Europe, where an estimated 400,000 people died annually from smallpox. Emperor Napoleon had all his troops vaccinated and later remarked Jenner was “one of the greatest benefactors of mankind.”
Jenner’s work on vaccination continued albeit preventing his ordinary medical practice. Parliament was petitioned and granted Jenner £10,000 (a huge sum) in 1802 for his work on vaccination. In 1807, the Royal College of Physicians granted Jenner £20,000 after confirming the widespread efficacy of vaccination.
In 1980, the World Health Authority announced smallpox had finally been eradicated. Blossom’s hide now hangs on the wall of the St George’s University Medical School Library, London.
Source: Bernicia Media