meta 88-year-old dairy farmer keeps ahead of technological changes :: The Bullvine - The Dairy Information You Want To Know When You Need It 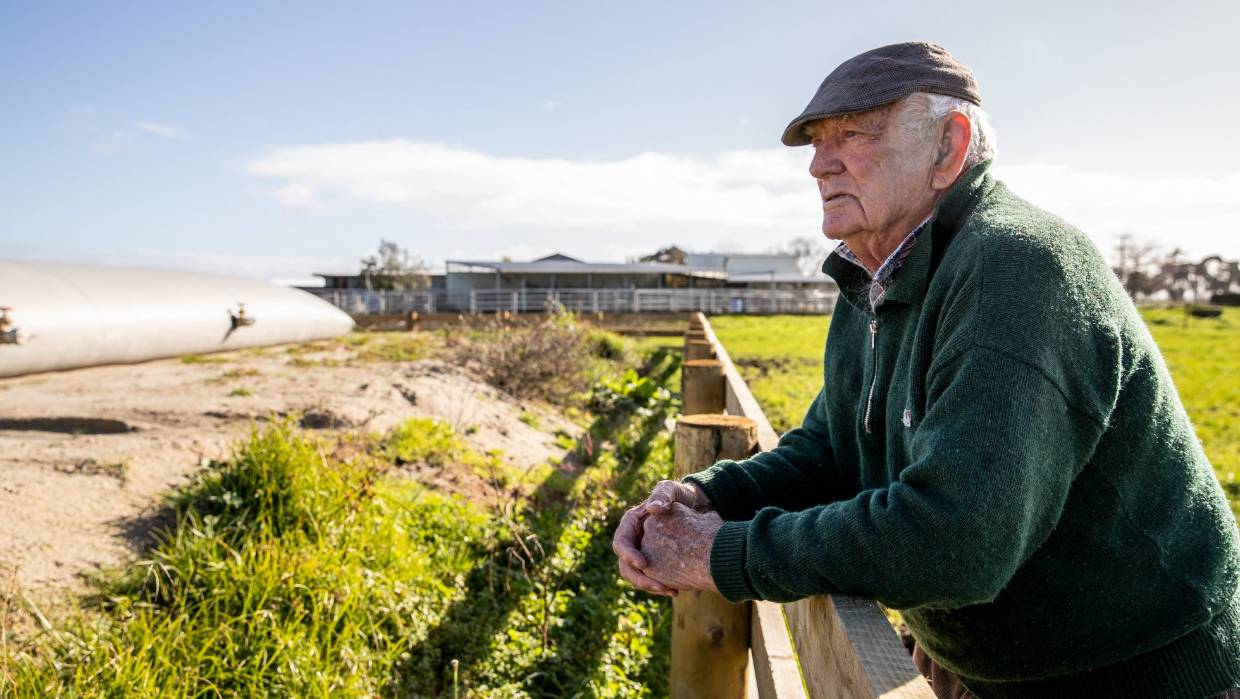 Ngatea dairy farmer Ken Jones, 88, says he has seen a lot of change in his 66 years in the industry.

“If you don’t comply you won’t be able to supply.”

Ngatea dairy farmer Ken Jones has seen the future – and at 88 years of age a lot of the past.

He knows farmers will soon be confronted with an assortment of environmental rules they will have to abide by – in fact they already are – and he wants to get ahead of the game.

“I don’t know how far off that is but it’s no good hitting your head against a brick wall. I just want to make the farm compliant so I can hand it on to the family.”

Mangatarata Farms has a total area of 161 hectares and milks 850 cows, run as two units. Jones runs the farm with the help of two 50:50 sharemilkers, and has a stake in a similar sized property nearby.

He recently commissioned a specialist to draw up a farm environment plan (FEP) to pinpoint any areas of concern and has begun acting on anything that is required.

One of the issues he has faced is upgrading the farm effluent systems on the two farms he owns, at a total cost of $200,000.

It is a far cry from the way he used to deal with effluent 66 years ago when he first started working on the property, which has been in the family for 88 years.

” My first effluent disposal was a square mouthed shovel throwing the cattle pats over the rail from the cow shed, but now we’ve got to the stage where we’ve got sprinklers sprinkling it on the farm.”

Jones said farmers were mindful of effluent treatment on the low lying Hauraki Plains, which sit just above sea level. A portion of the region is porous peat country.

“It’s always been a law in this area that you’ve never been able to run your cowshed effluent into any drains.”

Jones is just one of over 1000 Fonterra farmers who have commissioned FEPs, amid a rising tide of awareness that tighter environmental rules will soon bite. Fonterra prepares them free of charge; they are worth about $3500.

Once farmers achieve all steps on their FEP, and produce high quality milk, they receive Farm Source reward dollars.

Sustainable dairying advisor in the Bay of Plenty Karl Rossiter said the uptake had been high.

“I’m snowed under with farmer demand.”

In the 17 years he had worked at Fonterra, the FEP initiative was one of the best he had seen for farmers.

FEPs include: a nutrient overview (includes nitrogen and phosphorus management), a review of waterways and biodiversity, GIS mapping of land and soil, a review of infrastructure storage and waste, effluent overview, and water use. Advisors also help with nutrient budgets, farm maps and effluent storage calculations.

“It helps them find opportunities to improve their farm and it helps them meet local and regional requirements.

“It’s not something we write and dump on their table, and which they file under their bed. It has actions and minimal standards which have to be signed off,” Rossiter said.

A Fonterra spokeswoman said the plans could save a farmer time and trouble when it came to dealing with councils. She cited a recent example of a farmer who had an on-the-spot compliance visit from a council officer, but once he saw the FEP, he was satisfied.

Rossiter said Jones was incredible when it came to digital technology.

“He’s got a weather station, he knows his soil moisture deficit through sensors which he sends to his sharemilkers so they know if they can irrigate effluent or not.

“He runs a programme called ‘pastures from space’, so from satellites he measures the amount of grass cover in different places on the farm,” Rossiter said.

Jones said the dairy industry was now at the peak and he predicted it would start to scale back.

“What I think will happen is the cost of compliance will get too great and there will be a lot of people in the 200-300 cow range who will go out of dairy farming.

“If you take a couple in their 50s or 60s, they’re not wanting to borrow $200,000 to comply, so they’ll sell their cows, graze a few stock on the farm, keep living in the house and have a much easier life,” Jones said.