meta 8,000 years of drinking milk – the Ancient History of Producing Milk :: The Bullvine - The Dairy Information You Want To Know When You Need It

8,000 years of drinking milk – the Ancient History of Producing Milk 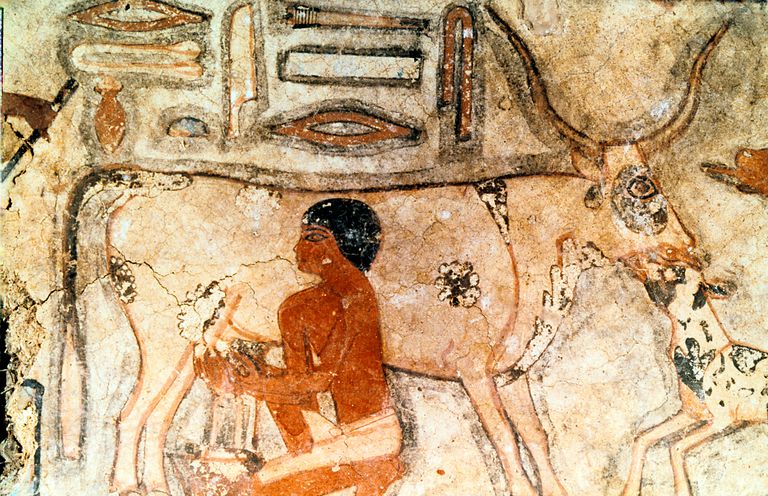 Milk-producing mammals were an important part of early agriculture in the world. Goats were among our earliest domesticated animals, first adapted in western Asia from wild forms about 10,000 to 11,000 years ago. Cattle were domesticated in the eastern Sahara by no later than 9,000 years ago. We surmise that at least one primary reason for this process was to make a source of meat easier to get than by hunting. But domestic animals also are good for milk and milk products like cheese and yogurt (part of what V.G. Childe and Andrew Sherratt once called the Secondary Products Revolution). So―when did dairying first start and how do we know that?

Evidence for dairying―that is to say, milking dairy herds and transforming them into dairy products such as butter, yogurt, and cheese―is only known because of the combined techniques of stable isotope analysis and lipid research. Until that process was identified in the early 21st century (by Richard P. Evershed and colleagues), ceramic strainers (perforated pottery vessels) were considered the only potential method of recognizing the processing of dairy products.

Lipids are molecules which are insoluble in water, including fats, oils, and waxes: butter, vegetable oil, and cholesterol are all lipids. They are present in dairy products (cheese, milk, yogurt) and archaeologists like them because, under the right circumstances, lipid molecules can be absorbed into ceramic pottery fabric and preserved for thousands of years. Further, lipid molecules which are from milk fats from goats, horses, cattle, and sheep can be easily distinguished from other adipose fats such as that produced by animal carcass processing or cooking.

Ancient lipid molecules have the best chance of surviving for hundreds or thousands of years if the vessel was used repeatedly for producing cheese, butter or yogurt; if the vessels are preserved near the production site and can be associated with the processing; and if the soils in the vicinity of the site where the sherds are found are relatively free-draining and acidic or neutral pH rather than alkaline.

Researchers extract lipids from the fabric of the pots using organic solvents, and then that material is analyzed using a combination of gas chromatography and mass spectrometry; stable isotope analysis provides the origin of the fats.

Of course, not every person on the earth can digest milk or milk products. A recent study (Leonardi et al 2012) described genetic data concerning the continuation of lactose tolerance in adulthood. The molecular analysis of genetic variants in modern people suggests that the adaptation and evolution of the ability of adults to consume fresh milk occurred rapidly in Europe during the transition to agriculturalist lifestyles, as a byproduct of the adaptation to dairying. But the inability of adults to consume fresh milk may also have been a spur to inventing other methods for using milk proteins: cheese making, for example, reduces the amount of lactose acid in dairy.

Producing cheese from milk was clearly a useful invention: cheese may be stored for a longer period than raw milk, and it was definitely more digestible for the earliest farmers. While archaeologists have found perforated vessels on early Neolithic archaeological sites and interpreted them as cheese strainers, direct evidence of this use was first reported in 2012 (Salque et al).

Making cheese involves adding an enzyme (typically rennet) to milk to coagulate it and create curds. The remaining liquid, called whey, needs to drip away from the curds: modern cheesemakers use a combination of a plastic sieve and a muslin cloth of some sort as a filter to perform this action. The earliest perforated pottery sieves known to date are from Linearbandkeramik sites in interior central Europe, between 5200 and 4800 cal BC.

Salque and colleagues used gas chromatography and mass spectrometry to analyze organic residues from fifty sieve fragments found on a handful of LBK sites on the Vistula River in the Kuyavia region of Poland. Perforated pots tested positive for high concentrations of dairy residues when compared to cooking pots. Bowl-form vessels also included dairy fats and may have been used with the sieves to collect the whey.